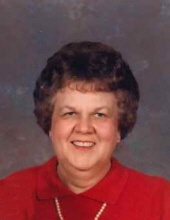 IN LOVING MEMORY OF
ALICE HALSTROM

MUSIC
“How Great Thou Art”
“Here I Am Lord”
Sung by: Robin Thomas
Pianist: LaNan Eldridge

After today’s graveside service, relatives and friends are invited
to join the family at the Laue Building in Paullina City Hall.

Alice Marie Halstrom, the daughter of Fritz and Ella (Puhrmann) Runge was born July 29, 1932 just outside of Calumet in rural O’Brien County, Iowa. She grew up on the family farm near Larrabee. Alice attended and graduated from Larrabee High School in 1950. She did miscellaneous housekeeping jobs for a few years after graduation until August 1, 1954 when she was united in marriage to Vernon Halstrom at the Zion United Church of Christ in Calumet, Iowa. Alice and Vernon then made their home in Paullina. This union was blessed with three children, Deborah, Brian and Janelle. Alice worked at home for some years until her kids got older. She then worked at the Bakery in Paullina for some time. Her highlight was when she learned how to drive stick shift by Elvyn Evans and then became the new bread truck driver but she did get a ticket for speeding once. Alice then worked at the Paullina Golf Course and The Martin House as part of the Green Thumb Program. She also worked at Lange’s Café where she helped in catering and the kitchen. Alice ended her working career as an assistant librarian in the South O’Brien High School in Paullina. She enjoyed working with all the students and her very good friend Susan Radosti. Alice retired in 2011 from the school and after some health issues. She continued to live in the family home in Paullina after her husband Vernon’s passing on December 23, 1999.
In November 2015, she entered the Pearl Valley Rehabilitation and Nursing Home in Sutherland, Iowa. Alice passed away there peacefully on Friday, December 15, 2017.
Alice loved playing cards and spending time with her card club friends. She enjoyed cooking and reading. She especially enjoyed her flowers in the summer which made her famous for her red geraniums on her front porch. She also enjoyed decorating her house for every holiday and season. But she enjoyed the most was spending time with her family and having a good time at it.
Left to cherish her memory are three children, Deborah Halstrom and her husband, Roger Richards of Omaha, Nebraska; Brian and his wife Tami of Avoca, Iowa; Janelle and her husband Jay Jones of Paullina, Iowa; two grandchildren, Eric Jones of Paullina, Iowa and Allyson Miller of Ft. Dodge, Iowa; two sisters, Delores Shilling of Sutherland, Iowa and Shirley Runge of Cherokee, Iowa; one brother, David Runge of Sutherland, Iowa; brother-in-law, Irvin Halstrom and his wife Shirley of Downey, California; sister-in-law, Joyce Grinstead of Meridian, Idaho and many other nieces, nephews, relatives, friends and former students.
Alice was preceded in death by her husband, Vernon on December 23, 1999; her parents, Fritz and Ella; her father and mother-in-law, Ed and Edna Halstrom; sisters, Dorothy and Betty; brothers, Dale and Rodger; brothers-in-law, Alvin Beermann, Oscar Mews, Earl Shilling, James Strilka, Howard Halstrom, Dale Halstrom, Richard Halstrom, Allyn Jones, John Nelson, Don Grinstead; sisters-in-law, Vivian Jones, Evelyn Brehm, Elvera Ruth Halstrom, Dorothy Halstrom; nephew, Dean Beermann; Larry Towe and her paternal and maternal grandparents.
To order memorial trees or send flowers to the family in memory of Alice Halstrom, please visit our flower store.