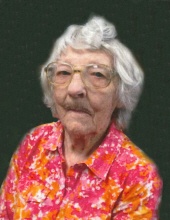 IN LOVING MEMORY OF
ANGELINE A. GROEN

After today’s graveside service relatives and friends are invited to join the family at Langer’s Café in Sheldon.

Angeline Alida Koole Groen was born January 11, 1921 in rural Sheldon, Iowa (Sioux County), the daughter of Joe Koole (1888-1977) and Alida (Allie) Erkes Koole (1899-1983) and grandparents Arie Koole (9/26/1842-12/27/1912) and Ingetje Pons Koole (9/28/1853-01/14/1936) and Jacob Erkes (1859-1924) and Alida Stientjes Erkes (1864-1931). She passed away on Thursday, September 6, 2018 reaching the age of 97 years, 7 months and 25 days.
She received her education through eighth grade at the Bell School just ½ mile south of her home where she walked to and from daily. She spent her hours helping her mama cook and can, along with working outside with her daddy with the animals and field work. She especially loved her dog, kittens, lambs and chickens.
In Luverne, Minnesota on September 29, 1950 she married Paul Groen (3/11/1923, Sioux Center, IA – 10/17/2010, Brookings, SD) son of Cornelius and Agnes (Verhey) Groen. They farmed together in Iowa and later moved to Brookings County, near Bushnell, SD where they ranched together raising purebred Herford cattle and hay until their retirement when they moved into Brookins, SD. Angeline moved to Fieldcrest Memory Care in Sheldon, Iowa in late June 2017.
She is survived by cousins and family friends.
She was preceded in death by her parents and husband, Paul Groen on (3/11/1923 – 10/17/2010).
To order memorial trees or send flowers to the family in memory of Angeline Groen, please visit our flower store.