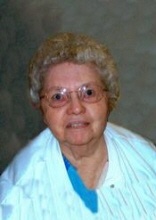 IN MEMORY OF
ARLENE J. VLIEGER

MUSIC
“Because He Lives”
“I’d Rather Have Jesus”
Sung by: Lori Heemstra
Organist: Alyda Haack

Arlene Jeanette Vlieger, the daughter of Ernest and Emma (Zeylemaker) Schmidt was born April 14, 1925 in Chandler, Minnesota. She moved with her family to Sheldon, Iowa, where she received her education and graduated from Sheldon High School. On June 8, 1945, she was united in marriage to Nelson Vlieger in Hospers, Iowa. After their marriage the couple farmed south of Hospers, Iowa until 1956, when they moved to a farm southwest of Hartley. Arlene was employed at Chase Lumber in Sheldon, the First National Bank in Primghar and the A.S.C.S. Office in Primghar. The couple retired from farming in 1984 and remained on the farm. They wintered in Ontario, California. Her husband preceded her in death on December 10, 1990 in California. After her husband’s passing, Arlene moved to Primghar to make her home. She remained in Primghar until entering the Christian Retirement Home in Sheldon and in January of 2010, she later moved to the Community Memorial Health Center in Hartley. She passed away at the Health Center on Sunday, April 3, 2011 reaching the age of 85 years, 11 months and 19 days.
She was a member of the American Reformed Church in Primghar and enjoyed knitting and word search.
Arlene is survived by her daughter, Barb and her husband, Daryl Ebel of Primghar; a daughter-in-law, Blanche Vlieger of Omaha, Nebraska; six grandchildren, Chad and his wife, Carol Ebel; Kelly and his wife, Tina Ebel and Becky and her husband, Mike Rader; Jeremy and his wife, Susan Vlieger; Brandt and his wife, Kaci Vlieger and Jonathan and his wife, Paige Vlieger; great-grandchildren, Tony and Nikki Ebel; Ethan and Jacob Rader; Avryll, Allie, Cecelia, Kinley, Cadence, Brooks, Liviana Vlieger, and step-great-grandchildren, Sammi Stange, Bradley (Monica) and Kaitlyn; six brothers and sisters, Bernice Idsinga of Seal Beach, California; Evan and June Schmidt in Utah; Henry and Harriet Schmidt of Slayton, MN; Bob and Becky Schmidt of Marysville, California; Joyce and Arnold Bakker of Seal Beach, California and Joan Johnson of Whittier, California; also other relatives and friends.
She was preceded in death by her husband, a son, John in 2008; two brothers, Donnie and Lloyd and one sister, Florence.
To order memorial trees or send flowers to the family in memory of Arlene Vlieger, please visit our flower store.