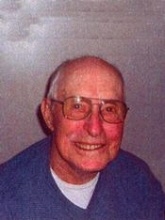 After Today’s service everyone is invited to join the family
for refreshments here at the funeral home.

Bernard L. “Bernie” McHugh, son of John “Jack” and Eva (Peterson) McHugh was born June 18, 1922 in Pisgah, Iowa. On November 22, 1943, he was united in marriage to Dorothy Butcher in Logan, Iowa. After their marriage the couple farmed in Harrison County until November of 1952, when they moved to Boise, Idaho where he worked at a Ford garage. They returned to Iowa the next spring to the Marcus, Iowa area where they farmed until 1963 when they moved to Gaza, Iowa. While living in Gaza he drove feed truck for the Gaza Elevator and Nicholson and Edwards in Primghar until retiring in January of 1983. After his retirement he cared for his wife Dorothy who had Alzheimer’s. He continued to do odd jobs and was known by many as the yard man as he mowed lawns and tilled gardens. Often family friend, Frances Schultz entertained Dorothy while Bernie rode bean buggies for area farmers as well as helping Mark Schultz on his farm. Dorothy passed away on January 8, 2002. Bernie continued to help others until he really retired at age 85. He enjoyed going to dinner date, spending time with his family, especially enjoyed his great grandson Hayden. He moved to the Primghar Care Center in December 2010. While there he enjoyed teasing the help, many visits with roommate Moris and playing bingo. He passed away on Friday June 3, 2011 at the care center reaching the age of 88 years, 11 months and 15 days.
Bernie is survived by his daughter, Beverly Hedinger of Primghar; son, Robert and wife, Alice McHugh of Worthington, MN; son, Max McHugh of Sheldon; nine grandchildren, nineteen great grandchildren and two great-great grandsons, a sister and her husband, Viola and Darrel Stephens; sister-in-law, Millie Butcher all of Missouri Valley, Iowa, sister-in-law Flora McHugh of Council Bluffs, Iowa; many nieces and nephews and friends.
He was preceded in death by his wife, his parents, great granddaughter, Amanda Hedinger; sisters, Betty, Maxine and Shirley; brothers, Royal, Roland, Roger, Kenneth and Sylvester.
To order memorial trees or send flowers to the family in memory of Bernard McHugh, please visit our flower store.