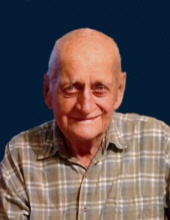 Visitation
with family present
will be from 5 – 7 P.M. on Monday, December 17, 2018
at Grace Lutheran Church in Primghar.

Military flag presentation by
Chateau-Thierry Post of the American Legion of Primghar.

Bert DeRidder Sr. was born June 3, 1926 at home on the farm east of Primghar in Highland Township, Iowa the son of Huibert and Marie (DeKruif) DeRidder. Since his folks spoke Dutch at home that was what Bert spoke. So when he started school he couldn’t speak English. He went for 2 or 3 weeks when he was 5 years old and quit. His folks had to teach him to speak English and then started school when he was 6. Bertus had a pony that he rode the ½ mile to school, but the pony would rub his halter off and go home so then Bert had to walk home after school. After he finished the 8th grade he stayed at home and helped his Dad on the farm.
In 1943, Bert moved to Primghar with his parents. In 1945, Bert went in to the Service (Army). He spent 3 months Basic Training at Camp Crowder, Missouri, then he came home on furlough. The next 6-7 weeks were spent at Camp Beale in California. He was stationed at Camp Robinson at Little Rock, Arkansas where he worked as a medic. He was discharged from Ft. Sam Houston at San Antonio, Texas in 1946.
When he got home he farmed with his Dad. On November 18, 1947, he was united in marriage to Kathleen “Kay” Flick at the Grace Lutheran Church in Primghar. After their marriage the couple began farming in the Primghar area until purchasing their own farm northeast of Primghar where the couple farmed for many years. Besides farming Bert drove truck. After nearly 70 years of marriage Kay passed away on August 11, 2017 in Primghar. Bert remained in the family home and passed away on Friday December 14, 2018 at the Baum-Harmon Mercy Hospital reaching the age of 92 years six months and eleven days.
Bert was a member of the Grace Lutheran Church in Primghar and the Chateau-Thierry Post of the American Legion. His hobbies were fishing, bowling and square dancing. His favorite spot for fishing was in northern Minnesota.
Bert leaves to cherish his memory three children:
Bertus & Betty DeRidder Jr. of Primghar, Iowa
Jerry & Gloria DeRidder of Primghar, Iowa
Karen & Larry Stewart of Scotland, South Dakota
Six grandchildren; five great grandchildren and one on the way;
Todd DeRidder-Elora of Cedar Falls, Iowa
Abby & Travis Wallin; Paullina, Iowa
Jason DeRidder & Lacey Leinbaugh; Seattle, Washington
Travis & Kara DeRidder-Willa & Lewis; Ankeny, Iowa
Ashley & Tanner Swanson-Lucy; Yankton, South Dakota
Kyle & Paige Stewart-Lance; Scotland, South Dakota
A sister-in-law; Verlene Flick of Hartley, Iowa also other relatives and friends.
He was preceded in death by his wife, great granddaughter; Maelynn Kay DeRidder, parents, brother-in-law; Pete Flick and a brother and sister–in-law; Marlin and Velma Flick.
To order memorial trees or send flowers to the family in memory of Bertus DeRidder Sr., please visit our flower store.