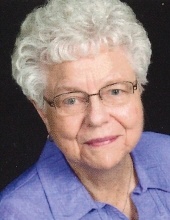 Bonnie S. Miller
Sheldon, Iowa
Bonnie S. Miller, age 89, of Sheldon, Iowa who passed away on Sunday, August 2, 2020 at Sanford USD Medical Center in Sioux Falls, South Dakota. Her funeral service will be 10:00 A.M. Thursday, August 6, 2020 at the Sheldon United Methodist Church with Pastor Kevin Gingerich ~ officiating.
Burial will be at the Remsen City Cemetery in Remsen, Iowa.
Visitation will be from 9 - 10 A.M. on Thursday, August 6, 2020 at the church.
Arrangements are under the care of the Vander Ploeg Funeral Home; Sheldon, Iowa.
Online condolences may be sent to www.vanderploegfunerals.com

CONGREGATIONAL HYMNS
“How Great Thou Art”
“It Is Well With My Soul”
“The Old Rugged Cross”
Organist: Barb Burns


BONNIE S. MILLER
Bonnie Sue Miller, the daughter of Floyd and Estha Mae (Wyble) Oden was born June 9, 1931 in Eolia, Missouri, where she received a majority of her education. She moved with her parents to Larrabee, Iowa as a junior in high school and graduated from Larrabee High School. On August 20, 1950, she was united in marriage to Kenneth Earl Miller in Larrabee, Iowa. After their marriage the couple farmed near Marcus, Iowa for several years. They moved to Kingsley, Iowa and later Remsen, Iowa. Her husband preceded her in death on November 4, 1999 in Le Mars, Iowa. Bonnie moved to Sheldon, Iowa in 2001 to make her home. She passed away on Sunday, August 2, 2020 at the Sanford Medical Center in Sioux Falls, South Dakota reaching the age of 89 years, one month and twenty-three days.
She was a member of the United Methodist Church in Sheldon and a church circle. She volunteered at the Treasure Chest in Sheldon. Bonnie enjoyed time with family and friends and baking, cooking, knitting, crocheting, and crafts. Bonnie was a loving wife and mother and a kind and generous soul. More recently she had become an avid reader when her health didn’t allow her to be active. Mom was soft hearted and loved all her children equally….something we would tease her about. The day before she died one of the last interactions with her was to ask her who was her favorite and she whispered the same message we always got “you all are”. She loved visits from children, grandchildren, and great grandchildren. She was a true friend to many and enjoyed sharing a cup of coffee and visiting. Underneath the kindness was a strong willed and determined person as well as a hard worker. Bonnie is now reunited with the love of her life, Kenneth. They enjoyed 49 years of marriage.
Bonnie is survived by her three children, Rose Ann (Roger) Hansen of Carson, IA; Earl (Pam) Miller of Dakota Dunes, SD; Gary (Vicki) Miller of Rogers, AR; six grandchildren, Kent (Jessie) Magnussen, Kevin (Jessica) Magnussen, Austin (Megan) Miller, Travis Miller, Amanda (Alec) Saline, April Miller; six great grandchildren, Morgan, Melodee, Keira, Johnna, Malaina Magnussen and Maylee Miller; one sister, Eva Bell Prater of Eufaula, AL; a sister-in-law, Delores Clymens of Sibley, IA and a brother-in-law, Max Waller of Spencer, IA also other relatives and friends.
She was preceded in death by her husband, son-in-law, Mike Magnussen; her parents, Floyd and Estha Mae, stepfather, William Urban, her mother-in-law and father-in-law Earl and Wilma Miller, brother, Orville Oden, sister-in-law, Donna Waller and brother-in-law, Jimmy Prater.
To order memorial trees or send flowers to the family in memory of Bonnie Miller, please visit our flower store.