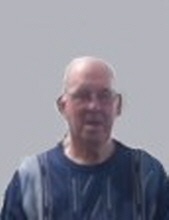 Services for Charlie Hibbing, age 89, of Paullina who passed away on Saturday, December 12, 2020 at Cherokee Specialty Care. His funeral mass will be held at 10:30 A.M. on Friday, December 18, 2020 at St. Joseph Catholic Church in Granville with Father Daniel Greving ~ officiating.
Burial will be at St. Joseph Catholic Cemetery in Granville. Graveside military rites will be conducted by the Granville Veterans.
There will be no visitation.
Masks will be required at the church.
Arrangements are under the care of the Eldridge Family Funeral Home in Paullina.

Charles Hibbing, the son of Ernest and Evelyn (Schueller) Hibbing was born on May 11, 1931 in Paullina, Iowa. He received his education from Paullina and Granville, graduating in 1949. On February 19, 1952 he enlisted in the United States Army. He served with ORD 903 H.A.M. Company in Nelligan, Germany until his honorable discharged on January 26, 1954. After his discharge he returned home to work on the family farm. On August 14, 1971 he was united in marriage to Gisela Dittman of Granville, Iowa. On Saturday, December 12, 2020 Charlie passed away at Cherokee Specialty Care reaching the age of 89 years, 7 months, and 1 day.
Charlie was a member of the St. Joseph Catholic Church in Granville. While in the service, Charlie’s greatest passion was playing on the Army baseball team while serving in Germany.
Left to cherish his memory is his sister, Mary Jean King of Omaha, Nebraska, several grandchildren, great grandchildren, nieces and nephews and friends.
Charlie was preceded in death by his parents, wife, and two brothers, Milton (Marie) Hibbing and James (Audrey) Hibbing.
To order memorial trees or send flowers to the family in memory of Charles Hibbing, please visit our flower store.