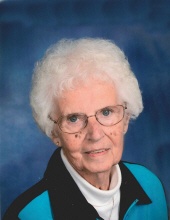 Christine Johanna “Kitty” Sauer, the daughter of Fred and Magdalena (Frederick) Fischer was born in rural Hospers, Iowa. She attended St. Anthony Catholic School in Hospers. Christine was united n marriage to Donald Charles Sauer on January 7, 1953 in Hospers, Iowa. Together they farmed near Sheldon, Iowa for 32 years, before moving into town in 1987. Donald preceded her in death in 1991. Kitty remained in her home until April of 2016, when she moved to the Christian Retirement home in Sheldon. In September of 2017 she moved to the Prairie View Retirement home in Sanborn, Iowa. Kitty passed away on Thursday, January 18, 2018 at Prairie View, reaching the age of 85 years, 11 months and 7 days.
She was a member of St. Patrick Catholic Church, the Ladies Guild and the Missionary Association She enjoyed being a farm wife and taking care of her family. She took great pride in her children, grandchildren and great-grandchildren. She loved all kinds of crafts, but she especially enjoyed crocheting and sewing together quilts.
Christine leaves to cherish her memories her children and their spouses, Diane (Gordon) Johnson of Canton, SD; Cheryl (Dale) Kaskey of Aurelia, IA; Roger (Darla) Sauer of Sheldon, IA; Bev (Tim) Klein of Wells, MN; a daughter-in-law, Sheryll (Dick) Adkins of Baltic, SD; 17 grandchildren, 25 great-grandchildren, a sister, Roseanne Goebel of Worthington, MN; 3 brothers, Harold (Ardell) Fischer of Fulda, MN; Gerald (Yvonne) Fischer of Rock Valley, IA; Jerome (Rita) Fischer of Hospers, IA; a sister-in-law, Catherine Fischer of Sheldon, IA also other relatives and many friends.
She was preceded in death by her husband, Donald; a son, Glen; a brother, John Fischer and a brother-in-law, Firmin Goebel.

Prayer of
St. Francis of Assisi

Grant that I may not so much seek
to be consoled as to console;
to be understood as to understand;
to be loved as to love.

For it is in giving that we receive;
it is in pardoning that we are pardoned;
and it is in dying that we are born to
eternal life.
To order memorial trees or send flowers to the family in memory of Christine "Kitty" Johanna Sauer, please visit our flower store.