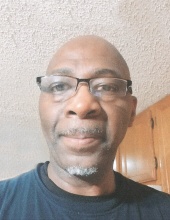 Christopher Johnson
Spencer, Iowa
A Celebration of Life Services for Christopher E. Johnson, age 59 of Spencer, Iowa who passed away on Monday, June 21, 2021 at the Avera Heart Hospital in Sioux Falls, SD, will be at a later date which will be announced.
In Lieu of flowers condolences may be sent to Angela Johnson 214 N. 4th Ave. Sheldon, Iowa 51201.

Christopher Eugene Johnson 59 passed away peacefully on Monday, June 21, 2021 at the Avera Heart Hospital in Sioux Falls, South Dakota. He was born January 12, 1962, in Cheyenne, Wyoming. He went to Cheyenne Central High School, going on to serve in the United States Marine Corps and receiving an Honorable Discharge. He served in many countries and in the United States.
He worked in various managerial positions and had settled in Walmart in Spencer, Iowa working as the Asset Security Manager. He loved his job there, getting to know and work with All the employees and customers, that shopped there from Spencer and surrounding towns.
Chris was a person you could always count on, he was always there to listen and give good advice, a helping hand. He ALWAYS had a smile and a way of making people laugh. He loved playing basketball with friends, cooking and barbecuing on the grill, playing WA-HOO with his wife, Angela and her parents, Marlys and Marlin Stellinga. He befriended almost everyone he met and loved his family and the Lord with a fierce passion.
Chris is survived by his wife, Angela Johnson, his in-laws, Marlin and Marlys Stellinga (who loved him as their own) brothers, Willie and Jessie, sisters, Betty, Vanissia, Paulette and Annetta. His four children, Shannon, Brandon, Thomas and Lindsey; two stepchildren, Stephanie and Benjamin; grandchildren, Gyrese, Kyianna, Shelby and Xavier; two step grandchildren, Michael and Taylor also other relatives and many friends.
He was preceded in death by his father, Mack P. Johnson Sr., his mother, Hattie Ann Chapman Johnson, brother, Mack P. Johnson Jr., brother-in-law, Matthew Stellinga and daughter, Shelby.

“Christopher you were very much loved, your loss will forever be felt by “ME”, your family and friends.”
“Semper Fi and Oorah!”
“I Love You, Later”
To order memorial trees or send flowers to the family in memory of Christopher E. Johnson, please visit our flower store.