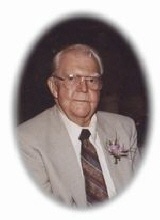 IN MEMORY OF
CLARENCE H. HATTERMANN


Clarence Herman Hattermann, the son of Herman and Minnie (Gaudian) Hattermann, was born April 24, 1919, in Caledonia Township, O’Brien County, Iowa. He attended school at Zion Lutheran School and later in country school in O’Brien County. On November 11, 1943, he was united in marriage to Orphie Tesch at St. John Lutheran Church in Germantown. After their marriage, the couple farmed south of Germantown for many years until they moved into Paullina in 1983. The couple’s retirement years were spent in Paullina. Clarence passed away on Saturday, November 12, 2005, at the Mercy Medical Center in Sioux City, reaching the age of 86 years, 6 months and 18 days.
He was baptized on May 11, 1919, at St. John Lutheran Church in Germantown and later confirmed on May 28, 1933 at Zion Lutheran Church in Paullina. He was currently a member of the St. John Lutheran Church in Germantown and had served as an elder, a school board member and as a trustee. He enjoyed the family farm, traveling and playing cards.
Clarence leaves to cherish his memory his wife, Orphie of Paullina, six children, Donald and his wife, Diana Hattermann of Paullina, Iowa; Dorothy and her husband, Terry Johnson of Sioux City, Iowa; Janette and her husband, Charles Mortenson of Kennedy, Minnesota; Patricia and her husband, Fred Dexter of North Venice, Florida; Marlene Thompson of Springfield, Virginia and James and his wife, Judy Hattermann of Paullina, Iowa; also 13 grandchildren; 6 great grandchildren; and other relatives and friends.
He was preceded in death by a daughter, Mary Jane in infancy; a son, John and his parents.

After the graveside service relatives and friends are invited to
join the family in the Germantown Community Building.
To order memorial trees or send flowers to the family in memory of Clarence H. Hattermann, please visit our flower store.