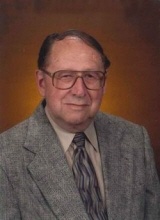 IN LOVING MEMORY OF
CLARENCE SCHMITH

Visitation will be after 2:00 P.M. Sunday with the family present from 3 to 5 P.M. Sunday at the Eldridge Family Funeral Home in Paullina, Iowa.

After todays service relatives and friends are invited to join the family in the fellowship hall of the church.


Clarence Schmith, 88 passed from this life into the arms of Jesus on Thursday, May 29, 2014 (Ascension Day)
Smitty was born on March 13, 1926, the only child of Oscar and Alma (Schroeder) Schmith. He spent his entire life in the Paullina area, attending Zion Lutheran School and working at various businesses in the area, including Ford Motor, Paullina Grain, and the Hawkeye Tap. As a young man he learned to play the accordion and played for dances in the area. He was baptized on March 19, 1926 and confirmed a Christian on May 19, 1940, a member of Zion Lutheran Church in Paullina. In 1946, he married Fern Mueller and they were blessed with three children: Susan (Rodney) Tester, Randy (Joni) and Sharon (Jim) Frye. Fern died in 1977 and he married Dorothy (Schmidt) Hoppe in 1983.
Clarence modeled a strong work ethic for his children. He was supportive of the community and served two terms on the city council. He enjoyed watching sports and playing cards, as well as keeping his yard mowed and his car clean as a whistle!
Smitty is lovingly remembered and missed by his wife, Dorothy; children, Susan (Rodney), Randy (Joni), and Sharon (Jim); grands, Michael (Jodie) Tester, Caleb (Anna) Tester, Zach (Amy) Tester, Nick (Anne) Schmith, Natalie (Phil) Schaefer and Abby (David) Synhorst; greats, David, Michael, Lexi, Ty, Jack, Bethany, Luke, John Henry, Isaac and Timothy Tester and Gus Synhorst (due in September); step-daughters, Linda, Connie and Sandy and their families.
He was preceded in death by his first wife, Fern; his parents, a step-daughter, Sharon and a step-son, Jim.
To order memorial trees or send flowers to the family in memory of Clarence Schmith, please visit our flower store.