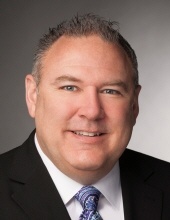 Dale Robert Acton age 57, of Geneva, Illinois passed away January 20, 2019. He was born to Robert and Carol Acton in Elmhurst, Illinois. He grew up in Lombard, Illinois and graduated from Glenbard East H.S. He was active in Basketball, Baseball and Track. He attended Iowa State University where he was a record holding high jumper and majored in Graphic Design. He met his wife Lisa in college and they married and began their life together in Ames, Iowa. They moved to Spirit Lake, Iowa, where their son Tayler was born, and Dale began his career in candy sales. His career took him to Arizona, where his daughter Nicole was born, then to North Carolina and eventually to Geneva, Illinois. He concluded his career at Goetze’s Candy Company as Vice President of Sales. Dale was very respected in the confectionery industry and was passionate about working with people. Dale was larger than life in every way. When someone met him they never forgot him. His greatest joy in life was spending time with his loving wife and amazing kids.
He is survived by his loving wife Lisa, son Tayler Acton, daughter Nicole Acton, sisters, Debra Acton, Dawn Acton, stepfather James Turner, cousins, Kim Zielske, Jamie (Jeremiah) Krystofiak and their children Caden & Ryan, Julie (Alex) Smith, mother-in-law Colleen (William) Barker, brother-in-laws, Ryan (Nicole) Lake, Jason Lake, and aunt and uncle in-law Don (Marcia) Faas.
He was preceded in death by his parents, his father-in-law Lenis Lake and sister-in-law Shawn Lake.

A Memorial Service will be held at 5:00 P.M. on Wednesday, January 30, 2019 at Grace Lutheran Church in Spirit Lake, Iowa.
To order memorial trees or send flowers to the family in memory of Dale R. Acton, please visit our flower store.