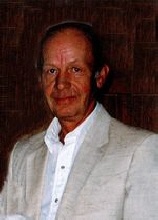 DAVID F. OLSON
David Fredrick Olson, the son of Theran and Ernola (Glatzel) Olson, was born September 26, 1945 in Brookings, S.D. He attended school in Bruce and White S.D. graduating from White High School. He went on to attend South Dakota State University graduating with a B.S. degree in Animal Science. On August 27, 1966 he was united in marriage to Carol Gilley in Brookings, S.D. He was called into the service during the Vietnam Conflict serving from June 22, 1969 until his discharge on May 15, 1971 being discharged as a Captain. The family lived in Aberdeen S.D. where he worked in the extension office. He later lived in Omaha, Nebraska and Albert Lea, Minnesota where he worked for Wilson Packing plant until he moved to Orange City, Iowa. He was one of the founders of the Mid America Lamb Plant in Paullina, which he helped operate for 5 years. On June 28, 1991 he was united in marriage to Lorna Rabe in Las Vegas, Nevada. The couple made their home in Paullina where he operated the Time-Out, he worked for Bunkers feed in Granville, Tyson Foods in Cherokee, P.P.I. Packing in Hospers and the Farmers Co-op in Paullina. He passed away on Tuesday, February 12, 2008 at the Mercy Medical Center in Sioux City, reaching the age of 62 years, 4 months and 16 days.
He was a member of the Zion Lutheran Church in Paullina, the Russell West Post of the American Legion of Paullina. He enjoyed spending time with his family especially his grandchildren. He also enjoyed horses, jet-skiing, snowmobiling.
Dave leaves to cherish his memory his wife, Lorna of Paullina, two daughters and their husbands, Chandra and Randy Canaan of Box Elder, S.D. and Chira and Wade Corwin of Des Moines, a step-son and his wife, Jared and Rachel Rabe of Cedar Rapids, Iowa and a step-daughter, Koren Kent of Ft. Worth, Texas; also 6 grandchildren Andrew and Jace Canaan, Alexia and Logan Corwin and Zachary and Olivia Rabe, three sisters and their husbands, Paula and Gary Johnson of Brookings, S.D., Jolene and Alan Townsend of Conde, S.D. and Colleen and Greg Stratton of Sioux Falls, S.D. also other relatives and many friends.
He was preceded in death by his parents.
To order memorial trees or send flowers to the family in memory of David F. Olson, please visit our flower store.