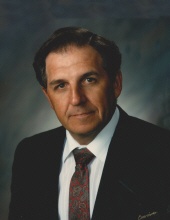 The family invites you to attend virtually as we celebrate Dean’s life and legacy. Please use this link to watch live.
https://youtu.be/oWL8RuCJ0BY

In lieu of flowers, please consider donating to Crossroads Prison Ministries (cpministries.org), an organization Dean participated in by exchanging letters with prisoners to study God's word and apply biblical truths to their lives; or to the Future Farmers of America (ffa.org) chapter of your choice as Dean & Charlotte hosted students for multiple summers and gained life-long friendships spanning generations and have had several grandchildren participate in this program.

Arrangements are under the care of the Andringa Funeral Home; Sheldon, Iowa.
Online condolences may be sent to www.vanderploegfunerals.com

IN LOVING MEMORY OF
DEAN A. SCHMIDT

Arrangements are under the care of the
Andringa Funeral Home - Sheldon, Iowa

Dean Allen Schmidt, the son of Edgar and Grace (Alons) Schmidt was born on July 29, 1935 in Hospers, Iowa. He attended Sheldon Christian Grade School and graduated from Western Christian Hull High School and went on to attend Calvin College in Grand Rapids, Michigan. Dean was united in marriage to Charlotte Dykstra on October 4, 1957 in Archer, Iowa. They made their home west of Sheldon, Iowa where he farmed until December of 2003. Dean then worked for White Wolf Web making deliveries for 10 more years. Dean was a resident of Prairie View Nursing Home in Sanborn when he went to meet his heavenly Father on February 20, 2021, reaching the age of 85 years, 6 months and 22 days.
Dean's desire was following Christ and being involved in his community. He was a member of the First Christian Reformed Church in Sheldon, Iowa, where he served as Elder on numerous occasions. He was active in his community serving on multiple boards including: Sheldon Christian School, Christian Retirement Home, Farm Bureau, NW Rural Electric Cooperative and Volunteers in Christian Service, along with other organizations. He cherished his time serving on the NIPCO board for 13 years and on the NW REC board for 36 years, making him the longest-serving board member (often holding the position of Secretary). One of the ways he ministered to people was by sending cards and words of encouragement. He enjoyed spending time with family, traveling, woodworking and a good game of cards.
Dean is survived by his children, Dale (Debra) Schmidt of Sheldon, IA; Lori (John) Kleyer of Sioux Center, IA; Evan (Dianne) Schmidt of Visalia, CA; Debra (Wade) Teague of Goldsboro, NC and an exchange student “daughter," Karin Mueller and Cormac Breen of London, England; 14 grandchildren, 10 great-grandchildren, 2 brothers, Henry (Joyce) Schmidt and Elmer R. (Mary) Schmidt both of Sheldon; a sister, Anna (Jim) Sluis of Edgerton, MN; and other relatives and friends.
He was preceded in death by his wife, Charlotte, his parents, a son-in-law, John Freehafer, a brother, Raymond Earl Schmidt and a sister, Mary (Wilbert) Evink.
To order memorial trees or send flowers to the family in memory of Dean A. Schmidt, please visit our flower store.