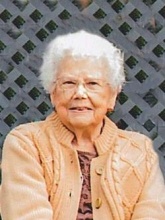 IN LOVING MEMORY OF
DELORES A. GINGER

Visitation with family present will be from 5 7 P.M.
on Friday, November 25, 2016
at the Eldridge Family Funeral Home in Primghar.

After the graveside service relatives and friends are invited to join
the family in the fellowship hall of the church.

DELORES A. GINGER
Delores Ann Dora Ginger, the daughter of George Ernest and Elsie Mae (Smidt) Horstmann was born July 19, 1926 near Sutherland, Iowa. She graduated from Calumet High School in 1944. On November 9, 1946, she was united in marriage to John Jack Ginger at her parents farm home near Sutherland, Iowa. The couple were blessed with three children Larry, Rick and Laurie. They lived on the Ginger farm until March of 1947, when they moved to a farm three miles east and one and one fourth miles south of Primghar. The couple farmed there for many years until moving to their new home in Primghar in 1982. Jack preceded her in death on December 23, 2010 in Sioux City, Iowa. Delores remained in the family home in Primghar and passed away on Monday, November 21, 2016 at the Baum-Harmon Mercy Hospital in Primghar reaching the age of 90 years, 4 months and 2 days.
She was confirmed at the Zion Evangelical Reformed Church in Calumet on April 6, 1941 and was a long time active member of the United Church of Primghar. She had served her church as a trustee, Sunday School teacher, Bible School teacher, and a member of the United Church Women. She was also a 4-H and Cub Scout leader. She enjoyed quilting, playing cards, and cooking being known to always have treats for everyone.
Delores is survived by her children, Larry (Mindi) Ginger of Des Moines, Iowa; Rick (Karen) Ginger of Primghar; Iowa; Laurie (Larry) Haugen of Mason City, Iowa; Grandchildren, Neal (Kari) Ginger; Kelli (Martin) Lambertus; Sarah Haugen (Joni Etheredge); Scott Haugen (Kristi Brown); Jasmine Ginger, Danni Hintz and Nicole Morton; nine great grandchildren; one brother, Leslie Horstmann of Kansas City, Missouri; sister-in-law, Bonnie Horstmann of Sutherland, Iowa; nieces, nephews, other relatives and many friends.
She was preceded in death by her husband, Jack; her parents, one sister and her husband, Elaine and Bob Nitz, a brother, Elden; Horstmann and a sister-in-law, Mabel Horstmann.
To order memorial trees or send flowers to the family in memory of Delores Ginger, please visit our flower store.