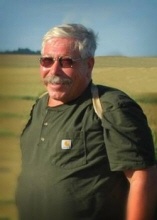 IN LOVING MEMORY OF
DENNIS A. CROATT

Visitation will be Friday, February 28, 2014 with family present from 5 to 7 P.M. with and a scripture wake service at 7 P.M. Friday all at the St. Anthony’s Catholic Church in Primghar, Iowa

After today’s service relatives and friends are invited to
join the family in the Primghar Community Building.

Arrangements under the care of the
Eldridge Family Funeral Home; Paullina, Iowa
DENNIS A. CROATT

Dennis Anthony Croatt was born January 28, 1953 in LeMars, Iowa to David and Jane (Full) Croatt of Sibley, Iowa. The oldest of ten Croatt children, Dennis graduated from Sibley High School in 1971, and immediately set himself up in Northwest Iowa for his lifelong love of farming. On June 2, 1973, he was happily united in marriage to Mary Margaret (Shea) Croatt at St. Joseph's Catholic Church in Granville, Iowa. The couple remained together for 40 years, with 32 of those years spent in the communities around Paullina, Iowa. There they raised their four children, Carrie, Nathan, Joshua and Matthew.
Dennis (Denny) was a jack of all trades and was known for 'Croattizing' many a piece of equipment. He worked several jobs throughout his career, the longest being in the Maintenance Department at Wells Blue Bunny in LeMars, Iowa. Through his years of working for other companies, Denny kept his full time job of farming. He would spend his days working his fields around the Paullina, Gaza, and Hospers areas and in Minnesota. For Denny farming was a labor of love, and thoroughly enjoyed how much it involved family. He would often be seen working with his father, Dave, uncle, Gerald, brother, Daniel, and especially his boys, Nathan, Joshua and Matthew.
When not working, which was rare, Denny enjoyed traveling to farm sales, antique shops, and flea markets with the other love of his life; his wife, Mary. For Denny, family and friends were everything. He enjoyed hosting and attending gatherings where his distinctive and infectious laughter could be heard above the crowds. Denny loved to socialize and celebrate. He loved a good story. He especially loved the times when his 9 grandchildren would come to visit and find Grandpa ready to walk around the acreage, let them “help” with chores, go for a ride in Big Red, entertain them with his hook, or play a hand of cards. Even after losing Mary in September of 2013, Denny maintained his social calendar and never turned down an opportunity to visit. His laughter, friendliness and good nature will be forever missed.
Left to cherish Denny's memory are his children; Carrie and her husband, Aaron Moore of Boise, ID; Nathan and his wife, Jennifer of Cloverdale, IA; Joshua and his wife, Ashley of Hospers, IA and Matthew and his wife, Jodi of Glenwood, IA; nine grandchildren, Elliott, Madeline, Anthony, Keaton, Aubrey, Marnie, Shelby, Jacob and Joshua; his parents, David and Jane Croatt; and his siblings Connie (Joel) Marco, Daniel (Sandy) Croatt, Julie (Pat) Eddy, Nick (Val) Croatt, Margie (Ripper) Stevens, Rich (Carla) Croatt, Bob (Maria) Croatt, Bill (Dawn) Croatt and Nancy (Neil) Wozney. He also leaves behind many in-laws, nieces and nephews on the Croatt and Shea sides.
He was preceded in death by his wife, Mary.
To order memorial trees or send flowers to the family in memory of Dennis A. Croatt, please visit our flower store.