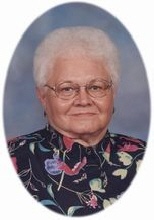 IN MEMORY OF
DOROTHY E. BEERMANN

MUSIC
“Beautiful Savior”
Sung by: Fred Schuknecht
CONGREGATIONAL HYMNS
No. 359 “Just As I Am”
No. 519 “How Great Thou Art”
Organist: Angela Johannsen

After the graveside service relatives and
friends are invited to join the family in
the fellowship hall of the church.

Dorothy Elaine Beermann, the daughter of Fritz and Ella (Puhrmann) Runge, was born January 4, 1931 on the family farm near Calumet, Iowa. She received her education in schools in Larrabee and graduated from Larrabee High School in 1949. On June 26, 1958, she was united in marriage to Alvin Beermann at the St. John Lutheran Parsonage in Germantown. After their marriage the couple lived in Germantown for a short time until moving just south of Germantown, where they operated Beermann Feed and Grinding. Dorothy worked for Jim Smith Insurance in Marcus and later was employed as a secretary at the Paullina School for many years, until retiring in 1992. Her husband preceded her in death on September 11, 1972 at their home in Germantown. She remained in the family home near Germantown before moving into Paullina in 1978. She passed away on Thursday, December 28, 2006 at the Community Memorial Health Center in Hartley, reaching the age of 75 years, 11 months and 24 days.
She was a member of Zion Lutheran Church in Paullina. Dorothy enjoyed spending time with her family; especially her grandchildren and she also enjoyed traveling.
Dorothy leaves to cherish her memory two daughters, Lori and her husband, Jim Burmakow of Paullina, Iowa and Terri Beermann of Kansas City, Missouri; three grandchildren, Sara, Megan and Jamie; four sisters, Alice Halstrom of Paullina, Iowa; Delores and her husband, Earl Schilling of Sutherland, Iowa; Shirley Runge of Cherokee, Iowa and Betty Strilka of Omaha, Nebraska; a brother, David Runge of Sutherland, Iowa; also nieces, nephews and other relatives and many friends.
She was preceded in death by her husband, a son, Dean on November 19, 1978; her parents, two brothers, Roger and Dale; and a special friend, Larry Towe on November 30, 2006.
To order memorial trees or send flowers to the family in memory of Dorothy E. Beermann, please visit our flower store.