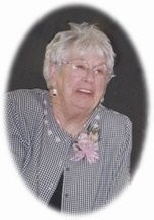 IN MEMORY OF
DOROTHY J. SCHOENING

Arrangements are under the care of the
Gaudian-Eldridge Funeral Home

After the graveside service, relatives and friends are invited to join the family in the fellowship hall of the church.


Dorothy (Dort) Josephine Schoening was born April 27, 1913 in Sanborn, Iowa to Andrew and Dora (Kitts) Hoeven. She graduated from high school in 1932 from George, Iowa.
Dort worked in many businesses in Primghar; the drug store, bakery and the grocery store. During World War II, she was a price clerk for the O.P.A.
On February 14, 1945, she was united in marriage to Milo (Mike) Schoening. Dort and Mike have lived in Primghar their entire married lives. She was a member of the United Church of Primghar, member of the Hospital Auxiliary, the American Legion Auxiliary and a very active mom and grandmother. One of her favorite past-times was ballroom dancing and later, much later in life, golfing. Dort passed away on December 6, 2005 in her home in Primghar, Iowa, reaching the age of 92 years, 7 months and 9 days.
Dort leaves to cherish her memory, her husband, Mike of Primghar; and three daughters and their husbands, Jean and Tim Ebel of Primghar, Iowa; Susan and Gary Smith of Eden Prairie, Minnesota; and Laurie and Mark Kurth of Davis, California. She has eight grandchildren, Andrea (Ebel) Fink and her husband, Jason Fink; Chris, Steve and Alison Smith; Jennifer, Daniel, Thomas and Jeffrey Kurth; two great-grandchildren, Mckoy and Ayden Fink. Also a dear sister, Esther Bacan of Orange City, Iowa; and loving sisters and brothers-in-law; and many nieces, nephews and friends.
She was preceded in death by her parents; four brothers, Ed, John, Bill and Allison Hoeven; and three sisters, Laverne Sundquist, Ellamay Hoeven and Evelyn Hoeven.
To order memorial trees or send flowers to the family in memory of Dorothy J. Schoening, please visit our flower store.