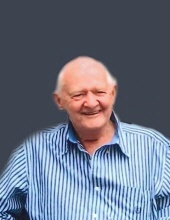 Egbert B. Kragt, age 79, of Sheldon who passed away on Saturday, October 9, 2021, at Sanford Senior Care in Sheldon. His funeral service will be held at 11:00 A.M. on Tuesday, October 12, 2021, at Immanuel Christian Reformed Church in Sheldon with Pastor Dave Van Kley ~ officiating.

IN LOVING MEMORY OF
EGBERT B. KRAGT

After today’s graveside service, relatives and friends are
Invited to join the family in the fellowship hall of the church.

Egbert B. Kragt, the son of Ben and Maxine (Vos) Kragt was born on November 3, 1941, in Hull, Iowa. He received his education from Sheldon Community Schools and Graduated from Sheldon High School in 1960. During high school he worked for Schemper Implement. After he graduated, he traveled to Bellflower, California to be a relief milker for the dairy farm operations in the area and returned in September 1960. On November 10, 1960, Egbert was united in marriage to Glenda DeZeeuw at Bethel Reformed Church in Sheldon. He worked for Northern Biochemical before starting his small dairy operation and being a hired man on the DeZeeuw family farm. After a few years Egbert and Glenda began their milking and farming operation and lived on the DeZeeuw family century farm. After retiring from milking in 2001, he continued to farm and started hauling hay in 2004 for the Rock Valley Hay Auction. Egbert's history with hay included planting, raising, baling, chopping, feeding, and hauling hay. Egbert and Glenda moved into Sheldon from the family farm in 2018. Egbert entered Sanford Sheldon Senior Care in May of 2020, he passed away there on Saturday, October 9, 2021, reaching the age of 79 years, 11 months, and 6 days.
Egbert was a member of Bethel Reformed Church in Sheldon where he had taught Sunday school. He was known for his gentle heart for his family, his livestock and family pets. He had a fascination for trains. He was very proud of his classic tractors, his H and Super M. He loved to read, dance, and play card games. Egbert and Glenda spent twelve years wintering in South Padre Island, Texas.
Left to cherish his memory are his wife of 60 years, Glenda of Sheldon; three daughters, Natalie and Gary Van Meeteren of Sheldon, Wendy and Kevin Arends of Sioux City, Iowa and Leah Monahan and fiancé Todd Burns of Sioux Falls, South Dakota; seven grandchildren, Jeremy Arends, Dillon Arends, Shayla Van Meeteren and fiancé Roger Schmith, Cody Van Meeteren, Jordan Monahan, Austin Monahan and Owen Monahan, three great grandchildren, Natilie, Oliver and Mavrick Schmith; sister, Ruth and Gordon Espelund of Spirit Lake, Iowa, brother, Phil and Deann Kragt of Sheldon, brothers-in-law, Rev. Sylvester Van Oort of Oacoma, South Dakota and Ray Tidblom of Madison, South Dakota, sister-in-law, Donna Reekers of Sheldon; also nieces, nephews, other relatives and friends.
Egbert was preceded in death by his parents, Ben and Maxine, parents-in-law, Jake and Viola DeZeeuw, sisters, Lily Van Oort and Helen Tidblom, brothers-in-law, Norman Reekers and LeRoy DeZeeuw and niece, Lisa Reekers.
To order memorial trees or send flowers to the family in memory of Egbert B. Kragt, please visit our flower store.