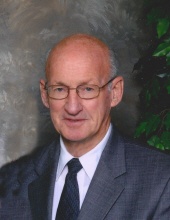 The family requests that everyone observes the social distancing guidelines during the visitation and the service at the church.
The Service will be live-streamed on First Christian Reformed Church website:
www.atfirst.org

Arrangements are under the care of the Vander Ploeg Funeral Home in Sheldon.
Online condolences may be sent to www.vanderploegfunerals.com

MUSIC
“Better Off There” and “The He Medley”
Sung by the Browns
CONGREGATIONAL HYMNS
Processional “Great Is Thy Faithfulness”
Recessional “By The Sea of Crystal”
Organist: Von Bolkema

Military graveside service by McGlothen-Cowie Post #145 of the American Legion of Sheldon, Iowa

Arrangements under the care of the
Vander Ploeg Funeral Home; Sheldon, Iowa
ERVIN C. BOLKEMA
Ervin C. Bolkema the son of Elze and Tillie (DeVries) Bolkema was born on February 24, 1935 in Sheldon, Iowa and passed away on Tuesday, July 21, 2020 at the Sanford Senior Care in Sheldon, Iowa reaching the age of 85 years, four months and twenty seven days. He attended Sheldon Christian School and Hull Western Christian High School. Ervin proudly served his country in the United States Army from 1954 until his discharge in 1956. He married Gladys Holtrop on February 17, 1959 in Sheldon. They lived on the farm until 1985 when they moved to Sheldon. They moved into the Christian Retirement Home in 2017. Ervin and Gladys moved into Sanford Senior Care in March 2020.
Ervin was a lifelong farmer. His mechanic and carpentry skills served him well throughout his life as he could build or fix anything. He made his first shelf as a preschooler and never stopped, even constructing his own grandfather clock from scratch. Ervin and Gladys enjoyed camping and volunteering. They developed many friendships through volunteering for Love Inc; Alpha Center; The Banquet; Volunteers in Christian Service and Justice for All to name a few. He was a long-time member of the First Christian Reformed Church in Sheldon. Ervin had a heart of service and served on numerous boards including Hope Haven, Alpha Center, Cutty’s and the Christian Retirement Home.
Survivors include his wife, Gladys of Sheldon, Iowa; children, Brenda (Randy) Van Kley of Spencer, Iowa; Ed (Jody) Bolkema of Sioux Falls, South Dakota and Marcia Bolkema of Sheldon, Iowa; four grandchildren, Chris Bolkema, Jen (Adam) Brown, Mitch (Kensi) Bolkema and Sara (Kaleb) Heckstein; four great grandchildren; Grayson Bolkema, Kate Brown, Liam Bolkema and Greta Brown also other relatives and many friends.
Ervin was preceded in death by his parents, Elze and Tillie Bolkema; an infant daughter, Gayla and his brothers, Vernon, Clarence and Johnnie.
To order memorial trees or send flowers to the family in memory of Ervin C. Bolkema, please visit our flower store.