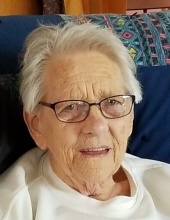 Visitation
with family present will be from 6 - 7 P.M.
on Thursday, January 9, 2020
at the Eldridge Family Funeral Home in Paullina.

MUSIC
“On The Wings Of A Dove”
Sung by: Jim & Dawn Huisman
Accompanied By: Pixie Balt
CONGREGATIONAL HYMNS
“On Eagle’s Wings”
“Just As I Am”
“Precious Lord, Take My Hand”
Organist: Angela Johannsen

Arrangements are under the care of the
Eldridge Family Funeral Home; Paullina, Iowa.
ESTHER K. EWOLDT
Esther was born to Ike and Clara (Determann) Huisman on May 14, 1933 which happened to be Mother’s Day that year. She was a member of the First Presbyterian Church in Alton being baptized there in 1950. She attended the Alton Public School, graduating in 1950. While attending school she worked at the OK café as a cook, then later went to work for Slagle Lumber as a telephone operator and then secretary. She married Burdette Ewoldt on February 1, 1955 and they moved to the Sutherland area living there for 4 years. While living in Sutherland she was confirmed at the Bethel Lutheran Church. Then they moved to Paullina living on various farms until 1967 when they moved to the family farm. They moved into Paullina in 1989. While living in Paullina she worked for Brockmann’s Fryers for 23 years and later at the Paullina Care Center for 14 years. Esther passed away on Sunday, January 5, 2020 reaching the age of 86 years, 7 months and 21 days.
Esther was a member of Zion Lutheran Church where she sung in the church choir. She enjoyed playing cards, sewing, doing crafts and was always a good helper whenever needed by someone. She especially enjoyed having her grandchildren when they would visit.
Left to cherish her memory is her husband, Burdette; son, Keith and his wife Lori Ewoldt of Paullina; grandchildren, Stacey Ewoldt (Corey Zimmer), Wendy (Eric) Reed and Keith (Stephanie) Ewoldt; 5 great-grandchildren. She is also survived two sisters-in-law, Karen Huisman of St. Ignace, Michigan and, Audrey Huisman of Omaha, Nebraska and several nieces and nephews.
Esther is preceded in death by her parents, three brothers, David, Ed (Marly) and Roger Huisman and a sister, Alberta (Jim) Van Grongin.
To order memorial trees or send flowers to the family in memory of Esther K. Ewoldt, please visit our flower store.