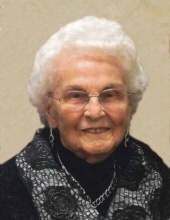 Visitation
with family present will be from 5 - 7 P.M.
on Tuesday, January 21, 2020
at the Eldridge Family Funeral Home in Paullina.

CONGREGATIONAL HYMNS
“Just As I Am”
“The Lord’s My Shepherd
“On Eagles Wings”
“Go My Children With My Blessing”
Organist: Jan Ebel

Arrangements under the care of the
Eldridge Family Funeral Home; Paullina, Iowa
Evelyn Wilhelmina Amendt Jalas was born January 21, 1922, in Sutherland, IA, to Alfred and Minnie (Kracht) Amendt. She was baptized on March 26, 1922. She was confirmed at Bethel Lutheran Church August 30, 1936, in Sutherland, IA. She attended country school near her home and also Sutherland Community School graduating in May 1939.
January 26, 1944, Evelyn married August Jalas in Sutherland. They farmed most their life near Sutherland, moving to Storm Lake, IA, in 1978. Evelyn worked with her husband in Real Estate and also at J.C. Penney’s retiring in 1995. In July 1997, they moved back to Sutherland. In March of 2011, Evelyn moved into the Willoway Heights Apartments in Sutherland. In September 2017, she moved to Pearl Valley Rehab and Nursing in Sutherland.
To August and Evelyn were born six children: Delmar, Duane, Merle, Leon, Colleen and Wilma.
She was a member of Bethel Lutheran Church of Sutherland until 1981, when she became a member of Grace Lutheran, Storm Lake, IA, returning to Bethel in 1997. She taught Sunday School and V.B.S. and also held various offices in Mary and Martha Society and Bethel Helping Hand Society. She was a member of the Sutherland Legion Auxiliary.
Her hobbies included gardening, dancing, knitting stocking caps, playing cards, visiting at the care center, enjoying her family and praying for them.
She was preceded in death by her parents, her husband August Jalas, a son Delmar Jalas, a daughter Wilma Schimmer, a daughter-in-law Jacqueline Puhrmann, a great-grandson Lucas Jalas, three brothers Everett Amendt, Marvin Amendt, and Leonard Amendt and sisters-in-law Irene Amendt and Rosali Amendt.
Survivors are her children Duane and his wife Rosemary Jalas of Sutherland; Merle and his wife Barbara Jalas of Sutherland; Leon and his wife Donna Jalas of Niangua, Missouri; Colleen and her husband, Richard Simm of Paullina, IA; and son-in-law Leo Schimmer and his wife Terri of Holstein, Iowa; 15 grandchildren and 36 great-grandchildren; one sister-in-law Maurine Amendt of Sutherland, one brother Wendell Amendt and his wife Sherry of Spencer, Iowa, and many other relatives and friends.
To order memorial trees or send flowers to the family in memory of Evelyn Jalas, please visit our flower store.