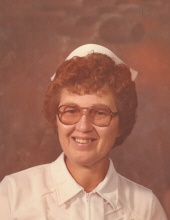 Visitation will be Saturday, August 10, 2019 from 10:00 AM until the time of service at the Vander Ploeg Funeral Home in Sheldon, Iowa

After today’s service, relatives and friends are invited
to join the family in the fellowship hall of the
United Methodist Church.

Arrangements are under the care of the
Vander Ploeg Funeral Home; Sheldon, Iowa.
FLORA “FLO” G. STAPLES
Flora “Flo” Gertrude Staples, the daughter of John and Harriet (Curl) Holwell, was born April 22, 1934 on Spotted Island, Labrador, Canada. She grew-up in Goose Bay, Canada and attended a boarding school in Cartwright. She met Bill while he was stationed in Labrador and then the two were united in marriage to William “Bill” Staples on October 14, 1960 in Jackson, Minnesota. The couple lived in several locations while Bill was in the service including Georgia, England, Michigan, Panama, Nebraska, Storm Lake and Sheldon, Iowa. Flo had worked as a CNA at the Sheldon Hospital; she went back to college and earned her Associates of Arts Degree with an LPN in Nursing. While she was going to school, she had taught each of the kids to cook so that she could concentrate on her studies. Flo worked at Sanford Sheldon Hospital until her retirement in 2013. Flo passed away on Wednesday, August 7, 2019 at Sanford Sheldon Senior Care in Sheldon, Iowa reaching the age of 85 years, 3 months and 16 days.
She was a member of the Anglican Church of England. Flo was known for knitting custom Christmas stockings for many years, for newborn arrivals, friends and family. She enjoyed soap operas, game shows, crossword puzzles and “chocolate treats”. She especially enjoyed spending time with her family and grandchildren.
Flo is survived by her husband, Bill; her children, Herbert Rex (Rosina) Holwell of Nain, Newfoundland, Canada; Barry Wayne (Claudia) Staples, Elaina Marie (Al) Long and Philip Jay Staples all of Sheldon, IA; 12 grandchildren, 25 great-grandchildren and 2 great-great-grandchildren, and other relatives and friends
She was preceded in death by her parents, John and Harriet Holwell and a sister, Lavinia Mack.

All things bright and beautiful,
all creatures great and small,
all things wise and wonderful,
the lord god made them all.

The purple headed mountain,
the river running by,
the sunset and the morning,
that brightens up the sky.

The cold wind in the winter,
the pleasant summer sun,
the ripe fruits in the garden,
he made them every one.

The tall trees in the greenwood,
the meadows where we play,
the rushes by the water,
we gather every day.
To order memorial trees or send flowers to the family in memory of Flora "Flo" Gertrude Staples, please visit our flower store.