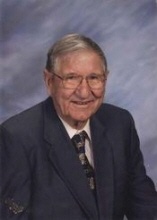 Arrangements are under the care of the
Eldridge Family Funeral Home; Primghar, Iowa
GILBERT WAYNE GILLESPIE

G. Wayne Gillespie, Sr. was born on August 21, 1914 north of Primghar, the son of S. Andrew and Myrtle (Siefkin) Gillespie. At an early age, his family moved to southwest of Primghar, where he grew up. He graduated from Primghar High School in 1929. On September 3, 1939, he married Ruth Steele from Sutherland. Wayne and Ruth farmed west of Moneta from 1940 until 1980 when they retired and moved to Hartley, where Ruth died in 1990. In 1991, he married Harriet Schwartz Strand of Primghar, where they lived until her death in 1995. He married Anna Schlicting and moved to Lake Park in 1997. He has resided at Community Memorial Health Center in Hartley since 2009 where he passed away on Thursday, May 2, 2013 reaching the age of 98 years, 8 months and 11 days.
Mr. Gillespie was a member of the United Methodist Church in Everly. Until recently he was an active member in the Methodist Men’s Group. He also served the church as a member of the board and various committees. Over the years he served the community as an Omega township clerk, a township election official and an Extension Council member.
Although the Great Depression derailed his dream of going to college to become an engineer, Wayne spent many hours in his well-equipped farm shop improving his farm equipment, creating specialty equipment and making repairs. In retirement, he traveled the United States and part of Europe, getting everywhere he wanted to go except for Ireland.
Survivors include three sons and daughters-in-law, Gilbert and Ardyth of Ithaca, New York; Jeff and Phyllis of Primghar and Greg and Julia of Hartley; a daughter and son-in-law, Allene Gillespie and Gerald Myers of Waukon, Iowa; seven grandchildren; three step grandchildren; four great-grandchildren; eleven step great-grandchildren; three step great-great grandchildren; one sister, Bernice Iverson of Paullina; two brothers, Ray of Lake Park and Lyle of Manitou Springs, Colorado; sisters-in-law, Doris Steele and Barbara Gillespie and a brother-in-law, Robert Steele; also other relatives and friends.
Besides his wives, he was preceded in death by his parents; an infant daughter, Illene; one brother, Lowell and three sisters, Gladys McDowell, Edith Parrish and Corrine Gillespie.
To order memorial trees or send flowers to the family in memory of Gilbert Wayne Gillespie, please visit our flower store.