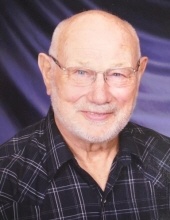 SPECIAL MUSIC
“Ave Maria”
CONGREGATIONAL HYMNS
“On Jordan Stormy Banks I Stand”
“So Take My Hand And Lead Me”
“Abide With Me”
Organist: Verla Hibbing

Hans Henry Hansen
Hans Henry Hansen the son of Hans and Maria (Fledermann) was born in Germany on May 24, 1933. He received his education in Germany and furthered his education by learning the trade of truck mechanic. When he was twenty he immigrated to the United States being sponsored by his aunt Margarete Hurtig. On July 18, 1956 he joined the United States Army serving in Korea until his honorable discharge on April 26, 1958. After his discharge he found work in Calumet, Paullina and Hospers as a mechanic and then in 1965 he started H & N Service Station in Paullina with his brother-in-law, Karl Nielsen. Henry was united in marriage to Ilse Kaufmann in 1965 in Hutchinson, Minnesota. To this union 3 boys were born. Henry had a passion for woodworking and gifted his family with his many creations. He loved to make tables, perhaps a few too many. Ilse has been known to ask how many tables do we need?
Henry passed away on Thursday, October 18, 2018 at Mercy Medical Center in Sioux City, reaching the age of 85 years, 4 months and 24 days.
Henry enjoyed traveling all over the United States and revisiting his homeland and relatives. The last few years he enjoyed spending the winter in Texas where he could play cards, dominoes and sheepshead as much and often as he wanted. He also enjoyed water volleyball.
Left to cherish his memory is his wife of 53 years, Ilse; three sons, Dirk and Melinda of Paullina, Paul of LeMars, Iowa and Mark and Teresa of Everly, Iowa; five grandchildren, DJ (Abby) Hansen, Kate and fiancé Jacob, Kodi, Kelsey (Dustin) Doyle and Jayden; last but not least his four great grandchildren, Braylee, Jackson, Stella and Carter; one sister, Irma and her husband Karl Nielsen; sister-in-law, Regina Telecky and brother-in-law, Günther Fries; also nieces and nephews; other relatives and friends.
To order memorial trees or send flowers to the family in memory of Hans Henry Hansen, please visit our flower store.