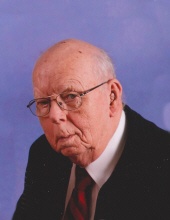 There will be no visitation.
In Leu of flowers Memorials may be directed to the family to be used at their discretion

Arrangements are under the care of the Vander Ploeg Funeral Home – Sheldon.

MUSIC
“The Old Rugged Cross”
“A Mansion Over The Hilltop”

Flag Presentation by:
McGlothlen-Cowie Post #145
of the American Legion

Harold “Hal” Eugene Tuttle, 93, of Sheldon, Iowa, passed away from complications of Covid-19 on Thursday, January 7, 2021 at the Royale Meadows Nursing Home in Sioux Center, Iowa.
He was born on July 31, 1927 on a small farm near Brooklyn, Iowa in Poweshiek County. He was the son of Andrew Orris II and Edith Viola (Erickson) Tuttle. After attending school and graduating from Thornburg High School, he joined the Marine Corps during World War II. After serving, he obtained his Bachelor of Fine Arts, Master of Fine Arts, Certification to teach Technical College I.S.U. all at Drake University in Des Moines, Iowa. Harold taught in several public schools in Iowa: Keokuk, Manilla, Mt. Vernon, and Sheldon. While in Manilla he met his wife, Paula Margaret Disburg and they were married on June 5, 1955. To this union there was one child born, Lanette Rae Tuttle. He was a member of the Sheldon United Methodist Church.
Most of his teaching career was spent in Sheldon, Iowa Community Schools where he educated so many kids with his passion of art. Not only did he teach during the day, but he taught night classes for Buena Vista University and held veteran’s night classes. He taught children and adult art classes at the Lakes Art Center, art classes for the Summer Rec of Sheldon for many years and also night classes for the Adult Ed Department for Sheldon Community School and NCC. He served the Sheldon schools as the TAG sponsor and mentor for 14 years, Art Club sponsor, prom supervisor, float builder and did background sets for the high school musicals. Hal was the Art Educators of Iowa Convention Chair and NW Iowa representative and found time to be the concession stand manager for over 16 years.
Hal served on many different boards while living in Sheldon. He was the artist and designer of the Sheldon Prairie Queen that is used on various things regarding the town. Served on the recreation and park board for several years and was one of the members of the Marigold committee that organized “Sheldon the Marigold City”.
After 40 years of classroom teaching, it was time to “retire” as the Sheldon’s art teacher. That did not slow him down and after a few years he started teaching for the Northwest Iowa Community College. He was the main person behind the formation of the Prairie Art Council and was so proud of what he accomplished out there. He served as president of that council for many years.
Because of Hal’s friendship and relationship with Dick Wansink… it was through this friendship that the art council acquired the Wansink property and on that property was Sheldon’s first schoolhouse. The first schoolhouse was all it took for him to see a vision and through many years and persistence the property now holds not only the first schoolhouse in Sheldon, but Nelson Township, Lynn Township and Baker Township schools and the Dan McKay Prairie Home all restored on the site on this property. He was so proud of that accomplishment. These buildings are now an especially important part of art, learning about the ways the county schools and fellowship in the community. He wrote and edited a book. “The Way We Were in the One Room Country School” as told by the Senior Citizens of Iowa. He loved the country schools.
After retirement, he joined and was a faithful member of the morning Prairie Queen Kiwanis Club. He served several years as president and secretary, receiving 17 awards for outstanding district secretary. He was instrumental in starting the Builder’s Club and Kid’s Club in the Sheldon area. He also received the Hixon Foundation membership. He was a 50 plus year member of the Masons, Abu Bekr Shrine, Easter Star and White Shrine. In 2018, he attended the Honor Flight.
Hal was able to slow down a little and found he enjoyed wood carving and found a calling for genealogy. Hours upon hours, he would be using ancestory.com and was proud to be able to trace his father’s roots to the 16th century in England and his mother’s roots to the 17th century in Norway.
Many summers were spent up at South Templar Park in Spirit Lake where he would enjoy family and friends. Weekends with the grandsons were a special treat for him. Many games of croquet and travels to the flea markets and of course miniature golfing were played and enjoyed, not many of the grandsons plays and musical concerts were missed during their school years.
It was 2017, that his health and eyesight started failing him and he moved into the Franken Manor in Sioux Center, Iowa to be close to his wife who was in the nursing home. He was able to fulfill his goal of still teaching art in his 90’s by doing classes with the people in the assisted living area where he was living. He called them his 80-year-old kindergartners and said it with a smile. He loved teaching!
Left to cherish his memory are his wife, Paula of more than 65 years; his daughter, Lanette (Rodney) Korver of Sheldon, Iowa; grandsons, Aaron (Danielle) Korver of Farmington, Minnesota and Marc Korver of Washington, Iowa; great grandsons, Tristan and Isaac Korver of Farmington, Minnesota; two sisters-in-law, Mary Ellen (Norman) Wilcox of Grayson Georgia and Mary Disburg of Cedar Falls, Iowa. Also, numerous nieces and nephews.
Hal was preceded in death by his parents and his siblings, Mabel Spading, Lyman Tuttle, Lucille Todd, Leona Tuttle, Andrew Tuttle III, and Joseph Tuttle and a brother-in-law, Alan Disburg.
To order memorial trees or send flowers to the family in memory of Harold "Hal" E. Tuttle, please visit our flower store.