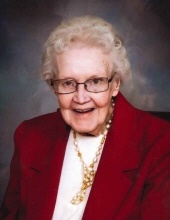 Visitation with family present will be from 5 – 7 P.M.
on Wednesday, January 24, 2018
at the Eldridge Family Funeral Home in Paullina.

After today’s graveside service, relatives and friends are invited
to join the family in the fellowship hall of the church..

Arrangements are under the care of the
Eldridge Family Funeral Home; Paullina, Iowa.
HAZEL HARTONG
Hazel Pauline Hartong, the daughter of Carles and Olga (Dingus) Harris was born on June 28, 1922 in rural Clare, Iowa. She attended country school and graduated from Bradgate High School in 1940. She continued her education at Buena Vista College and then Morningside College receiving her teacher’s certificate in 1942. She began teaching at Gaza School in 1942. On June 25, 1944 she was united in marriage to Marvin Hartong at the Bradgate Methodist Church. The couple made their home on the family farm where they raised their four sons. Hazel completed nursing assistant training in 1972 and worked for Cooper’s Care Center in Sutherland and then began working at Wide View Rest Home in Paullina in 1976 until her retirement in 1996. Marvin preceded Hazel in death on February 26, 2010. She remained in Paullina until entering Prairie View Home on April 27, 2015. Hazel passed away at Prairie View Home in Sanborn on Sunday, January 21, 2018 reaching the age of 95 years, 6 months and 23 days.
Hazel was a member of the First Presbyterian Church in Paullina. Her hobbies and interests have included dancing, gardening, painting, quilting, traveling and the Minnesota Twins. She also enjoyed cooking and baking; making many trips to the Clay County Fair with car loads of baked goods.
Hazel is survived by her four sons, Steve and Marlys Hartong of Paullina, Michael and Judy Hartong of St. Charles, Missouri, Daniel Hartong of Lincoln, Nebraska and Jay Hartong and Mary Pat Kunkle of Omaha, Nebraska; five grandchildren, Stephani and Scott, Samantha, Megan, Daniel Joe and Misty Lynn and David John and Jessica; six great grandchildren, Tyson, Ethan, Preston, June Bug, Kimberly and Makayla. She is also survived by one sister, Dorothy Lanning; sister-in-law, Lois Tjossem; also nieces; nephews; other relatives and friends.
A special thanks to Vickie Frisbee and Marj Feltman.
Hazel was preceded in death by her parents; husband, Marvin; one sister, Georgette and brother, Lawrence.
To order memorial trees or send flowers to the family in memory of Hazel Hartong, please visit our flower store.