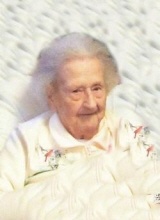 Visitation with the family present will be from 10:00 A.M.
Saturday until the time of the service
at the Eldridge Family Funeral Home in Paullina, Iowa.

HELEN F. REIMERS
Helen Frances Reimers, the daughter of Hannes and Meta Harmen Kuehl was born December 19, 1915 in Liberty Township, OBrien County, Iowa. She received her education in OBrien County country school. On January 29, 1939, she was united in marriage to Marlin Reimers in Cherokee, Iowa. They moved to the farm south of Calumet and farmed for five years. The couple were blessed with twins on June 16, 1943, a son, Stanley and a daughter, Sandra. Sandra passed away when she was only 10 days old. Her husband, Marlin passed away on February 3, 1944. After his passing Helen and her son, Stanley moved into a house in Calumet, Iowa. Her son, Stanley passed away in August of 1964. Helen remained in the family home in Calumet until moving to the Sutherland Care Center in Sutherland, Iowa on June 29, 2005. This remained her home until passing away at the Care Center on Wednesday, December 21, 2016 reaching the age of 101 years and two days.
She is survived by a daughter-in-law, Mary Ann Kuehl of Paullina, Iowa; a son, Merle L. Kuehl of Remsen, Iowa; her grandchildren, Lanna K. Kuehl, Nancy Ann Kuehl, Jeffrey Kuehl, Gary Kuehl, Ronnette Puhrmann, Tammy Miller, Lori Schwebach and Michelle Miller; fourteen great grandchildren also other relatives and friends.
Helen was preceded in death by husband, Marlin; daughter, Sandra; son, Stanley; son, Donald Kuehl; daughter-in-law, Gerda Kuehl; parents, two brothers, Herbert and Lester Kuehl and their wives; three sisters, Alice Reimers, Elda Oentrich and Irene Hoppe and their husbands.
To order memorial trees or send flowers to the family in memory of Helen F. Reimers, please visit our flower store.