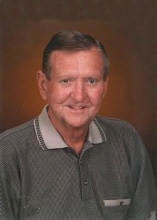 FINAL RESTING PLACE
Graveside service 10:15 A.M. Tuesday, April 1, 2014
Prairie View Cemetery
Paullina, Iowa
In Lieu of flowers the family would like memorials directed to:
The Zion Lutheran Church in Paullina, Iowa
After todays service, relatives and friends are invited to join the family in the fellowship hall of the church.

Arrangements under the care of the
Eldridge Family Funeral Home; Paullina, Iowa
IVAN L. THOMPSON
Ivan Lynn (Ike) Thompson, the son of Isaac and Lillie (Stangeland) Thompson was born December 10, 1937, in Spencer, Iowa. During his younger years, he enjoyed all sports, especially football. He received All-Conference and All-State honors as quarterback. Ike graduated from Paullina High School in 1956. He continued his education at NBT Business College in Sioux City.
He started his career at Earl Davis Accounting in Marcus from 1957 until 1962, when he left to become general manager for Sheldon Lumber. On October 20, 1963, he was united in marriage to Carol Gaudian at Zion Lutheran Church in Paullina and they resided in Sheldon. In 1969, he began selling cars and became general manager at Koopman Motors in Sheldon. After a tornado hit the family farm in 1980, Ivan and Carol built a new home and moved from Sheldon to take up farming full-time. He continued to work seasonally for Cain-Ellsworth Public Accountants for 23 years doing taxes, which he thoroughly enjoyed.
Even as Ivans health failed, he was passionately involved in farming. He passed away on Friday, March 28, 2014, at Mercy Medical Center in Sioux City, Iowa, reaching the age of 76 years, 3 months and 18 days.
He was a member of the Zion Lutheran Church in Paullina and served as elder. He enjoyed special times with his family, farming, bowling, golf and NASCAR.
Ivan leaves to cherish his memory his wife of 50 years, Carol of rural Paullina; a daughter and her husband, Noreen (Dale) Christians of Urbandale, Iowa; a son and his wife, Mike (Nancy) Thompson of Hospers, Iowa; seven grandchildren, Eliot, Tyler, Ashton, Emily, Cara, John, and Sierra and other relatives and friends.
He was preceded in death by his parents, Isaac and Lillie and his step-mother, Lydia.
To order memorial trees or send flowers to the family in memory of Ivan L. Thompson, please visit our flower store.