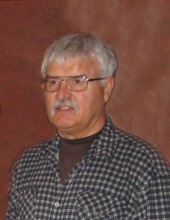 Services for James A. “Jim” Rohrs, age 71 of Paullina, Iowa have been cancelled and will be held for the immediate family members only.
Memorials may be directed to the Parkinson Foundation.
Arrangements are under the care of the Eldridge Family Funeral Home in Paullina

IN LOVING MEMORY OF
JAMES A. “JIM” ROHRS

Military flag presentation by Russell West Post
of the American Legion of Paullina.

JAMES A. “JIM” ROHRS
On Thursday, March 12, 2020 James Allen Rohrs passed away at Community Memorial Health Center, Hartley Iowa.
Jim was born to Elmer and Esther Rohrs in Primghar, Iowa. He attended school in Lawton and Paulina, graduating in 1967 from Paullina High School. He attended University of South Dakota at Vermillion before enlisting in the United States Marine Corp with deployment to the Vietnam conflict 1971. Upon honorable discharge he returned to Paullina where he went to work with a pipeline company located in Sanborn, Iowa for the next 46 years. He enjoyed working for many years with his friends, Chuck Postma and Gary Meyer until his retirement in 2015.
Jim was an avid outdoorsman, taking fishing trips to Canada. He especially loved pheasant and deer hunting with his brothers and friends. He also enjoyed riding his Harley motorcycle.
Jim is survived by his sister, Pat Sands of Merrill, Iowa; brother, Tom (Freva) Rohrs of Jefferson, Iowa; brother, David (Bonnie) Rohrs of Sutherland, Iowa; sister, Mary (John) Sherman of Broomfield, Colorado and sister-in-law, Florence Rohrs of Antioch Illinois; also many nieces, nephews, other family and friends.
He is preceded in death by his parents, brothers, William and Robert Rohrs and brother-in-law, Larry Sands.

Memorials may be directed to
the Parkinson Foundation.
To order memorial trees or send flowers to the family in memory of James Allen Rohrs, please visit our flower store.