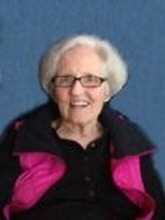 IN LOVING MEMORY OF
JEAN D.EDWARDS

Visitation will be after 3 P.M. on Monday, December 7, 2015
with family present from 5 7 P.M.
at the Eldridge Family Funeral Home in Primghar, Iowa.

MUSIC
When I Get Where Im Going
Hallelujah
Organist: LaNan Eldridge

JEAN D.EDWARDS
Jean D. Edwards the daughter of Art and Ruby (Plummer) Wilson was born on April 24, 1939 in Sioux City, Iowa. She attended and graduated from Lawton High School in 1957. After graduation she attended Morningside College in Sioux City, Iowa where she met her husband, Bill. She was united in marriage to William Edwards on September 1, 1961 in Sioux Falls, South Dakota. After their marriage the couple moved to Primghar where Jean worked with her husband Bill at Nicholson and Edwards Grain Company. Bill preceded Jean in death on July 13, 2005. After Bills passing, Jean remained at home until entering Prairie View Home in Sanborn in 2014, where she passed on Friday, December 4, 2015 reaching the age of 76 years, 7 months and 10 days.
Jean was an active member at the United Church of Primghar. She was a member of the Baum Harmon Hospital Auxiliary and past board member. She enjoyed cooking, baking, sewing, going to her kids and grandchildrens activities and traveling.
Left to cherish Jeans memory is three sons, their wives, and their families, Kurt and Marilee Edwards and their son, Derek and wife, Ang and daughters, Rae and Aria; Jim and Loretta Edwards and their children, Traci, Ashli and her husband, Adam and Bryce; Tom and Jody Edwards and their children, Mitchell, Matthew and Brooklyn all from Primghar; her mother, Ruby Wilson of Sioux City, Iowa; twin sister, Joan Brink of Arvada, Colorado and sister, Mary Lou Anderson of Lawton, Iowa; also other relatives and many friends.
Jean was preceded in death by her husband, Bill and her father, Art.

See Ya Around The World
To order memorial trees or send flowers to the family in memory of Jean D. Edwards, please visit our flower store.