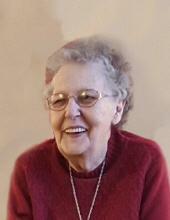 MUSIC
“In The Garden”
Sung by: Pam Tiedeman and Martha Sybesma
CONGREGATIONAL HYMNS
“One Day at a Time”
“How Great Thou Art”
Organist: Carleen Kehrberg

After today’s service, relatives and friends are
invited to join the family in the fellowship hall of
St. Paul Lutheran Church in Sheldon

Arrangements are under the care of the
Vander Ploeg Funeral Home; Sheldon, Iowa.
JOANN G. OLTMANS
Joann Gertrude Oltmans, the daughter of Peter and Joise (Koele) Rons was born on June 26, 1933 in Boyden, Iowa. She attended rural schools in the Sheldon area, she attended high school in Boyden, Iowa for 2 years and graduated from Sheldon High School in 1950. She was united in marriage to Harm Oltmans on February 22, 1951 on the family farm near Sheldon, Iowa. To this marriage they were blessed with 6 children, Diane, Donna, Darla, Daryl, Darwin and Dale. Harm and Joann farmed from 1952 – 1963; Joann had worked as a nurse’s aide and at K-Products as a supervisor and line-worker where she retired in 1992. Joann passed away on Wednesday, December 27, 2017 at the Fieldcrest Assisted Living, reaching the age of 84 years, 6 months and 1 day.
She was a member of St. Paul Lutheran Church in Sheldon. She enjoyed sewing, quilting, gardening, camping and going to Mesa, Arizona for the winters.
Left to cherish her memories is her husband of 66 years, Harm of Sheldon; three daughters and their husbands, Diane (Don) Martin of Ocala, Florida; Donna (Gary) Petitt of Sheldon, Iowa; Darla (Dwight) Jacobs of Spirit Lake, Iowa; 2 sons, Darwin (Kandi) Oltmans of Orange City, Iowa and Dale (Lora) Oltmans of Alton, Iowa; daughter-in-law, Shirley (Oltmans) and her husband, Dean Domeyer of Ellsworth, Minnesota; 13 grandchildren and 18 great grandchildren, a brother and his wife, Robert and Una Rons of Tyler, Minnesota and other relatives and friends.
Joann was preceded in death by her parents, a son, Daryl Oltmans and a grandson, Daryl Ray Oltmans.

“He Maketh No Mistakes”

My Father’s way may twist and turn
My heart may throb and ache,
But in my soul I’m glad I know,
He maketh no mistakes.

My cherished plans may go astray,
My hope may fade away,
But still I’ll trust my Lord to lead,
For He doth know the way.

Tho’ night be dark and may seem
that day will never break,
I’ll pin my faith, my all, in him,
He maketh no mistake.

There is so much now I cannot see,
My eyesight’s for too dim,
But come what may,
I’ll simply trust and leave it all to him.

For by and by the mist will lift,
And plain it all He’ll make,
Through all the may, tho’ dark to me,
He made not one mistake.
A.M. Overton
To order memorial trees or send flowers to the family in memory of Joann G. Oltmans, please visit our flower store.