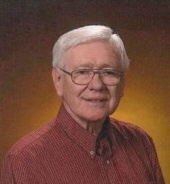 John Collins Byrd was born June 25, 1933, son of Walter and Rose (Collins) Byrd. He attended elementary school in Baywood, Virginia and graduated in 1951 from Galax High School. In 1955 he graduated with a BA in History from Milligan College, Tennessee. At Milligan he developed a deeper faith in Jesus Christ and was baptized. This commitment led to a lifetime of service as elder, Sunday School teacher and minister in the Christian Churches/Churches of Christ.
John served in the U.S army as a cryptologist in Paris, France for two years and he and his fianc, Lorena Byrd of Sheldon, Iowa were married in Ville dAvray, France on July 6, 1957.
John taught at his alma mater in Galax, VA. for several years, where he coached debate and directed plays. He also served as minister at Locust Grove Church of Christ. While in Galax, John and Lorenas four children were born.
John received an M.A. from the University of Wyoming, Ed.S from Vanderbilt University in Nashville, Tennessee and a Ph.D from Kansas State University.
During his life he taught high school and ministered at the Church of Christ for 3 years in LeMars, Iowa, 8 years at Proviso East High School in Maywood, Illinois and 20 years at Seoul Foreign School, South Korea.
Upon retirement from SFS in 1979, he settled in Primghar, taught two years in Bigelow, Minnesota and ministered at Primghar Church of Christ for five years. John had a lifelong interest in Christian missions, education, books, books, books and travel. He and Lorena were able to visit 45 countries on four continents.
He passed away at his home in Primghar, October 8th. He is survived by his loving wife Lorena of 58 years. He is also survived by sons, Allen (Myounyhee) Byrd of Chicago, Illinois and Stephen Byrd of Primghar, Iowa; daughters, June (James Milliken) Byrd of Seoul, South Korea and Rose (Dave) Gifford of Denver, Colorado. He is also survived by nine grandchildren. Matthew, John, James, Calvin, Mattie, Michal, Kendra, Paige and Mercy, his sister Francis and brother-in-law Willard Chappell of Galax, Virginia, sister-in-law Ruby Byrd of Galax Virginia and sister and brother-in-law Wanda and David McCord of Roanoke, Virginia.
He was proceeded in death by his parents, his mother and father-in-law; Elmer and June Stofferan, daughter-in-law; PangWon Byrd, and his brother; Joe Byrd.
John will be buried in the family cemetery on the family farm near Baywood, Virginia.
To order memorial trees or send flowers to the family in memory of John C. Byrd, please visit our flower store.