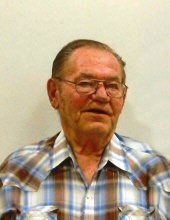 After today’s service, relatives and friends are invited
to join the family in the fellowship hall of the Sheldon United Methodist Church.

John Dick Rus, the son of Bert and Gertie (Van Maanen) Rus was born on March 12, 1931 in Armour, South Dakota. He received his education up to the 8th grade in South Dakota. In 1944 John moved to Alvord, Iowa. At age 19, he moved to Michigan. John married Connie Boluyt in 1951 in Grand Rapids, Michigan. After their marriage John worked for Ada Beef from 1951 to 1962. In 1962, they moved to Iowa. He then went on to work for the USDA as a meat grader for 28 years. The couple moved to Alton where they resided for many years. Connie passed away in 1990. John remained in Alton until he moved to the Christian Retirement Home in Sheldon. John passed away on Tuesday, March 28, 2018 at Sanford Sheldon Medical Center reaching the age of 87 years and 15 days.
He was a Netherland Reformed member and attended church at Heritage Reformed Congregation in Hull.
John is survived by his six sons, Robert and Melissa Rus of Paullina, Iowa; Donald and Debi Rus of Maryland; Thomas and Lyzel Rus of Pasco, Washington; Jon and Gayle Rus of Anchorage, Alaska; James Rus of Osage Beach, Missouri and David and Connie Rus of Council Bluffs, Iowa; fourteen grandchildren; nine great grandchildren; a brother, Ed and Sharon Rus of Rock Valley, Iowa and a sister, Lucille of Hawarden; also nieces; nephews; other relatives and friends.
John was preceded in death by his parents; his wife, Connie; a brother, Cornie and a sister, Bernice.
To order memorial trees or send flowers to the family in memory of John D. Rus, please visit our flower store.