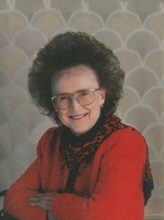 After the graveside service, relatives and friends are invited
to join the family in the fellowship hall of the church,
which will include Juanitas favorite dessert, banilly (vanilla) ice cream.

JUANITA M. HOEPPNER
Juanita Madeline Hoeppner, the eldest daughter of John and Vivian (Cobb) Begg, was born November 13, 1926, in Le Mars, Iowa where she spent much of her time with her Aunt Agda and Uncle Ralph on their farm. She graduated from the Le Mars High School with the class of 1944. Juanita continued her education at Westmar College, where she obtained a teaching certificate in elementary education. In 1945 and 1946, she was a third grade teacher at Live Oak School in Lodi, California. Following that, Juanita was an elementary teacher in Archer, Iowa, where she met her future husband. On May 31, 1947, she was united in marriage to Paul Hoeppner of Calumet at the Stanton Township Presbyterian Church near Le Mars, Iowa. For most of their married life, the couple lived on an acreage west of Sutherland. To this union four children were born, Susan, Debbie, Mike, and John. Juanita and Paul operated grocery stores in Arnolds Park, Marcus, Paullina, and Sutherland, Iowa. In her early years, she and her husband belonged to several card clubs and went on many seed corn company trips. She was also a member of birthday club, poker club, and past president of the American Legion Auxiliary of Sutherland. She was a 4-H leader of the Liberty Lassies for several years, organizing fundraisers that allowed the club to charter a bus and travel to Minneapolis to attend the Chanhassen Dinner Theatres. Following her husbands death, Juanita remained on the farm for many years and stayed a strong and independent woman. She was a loving mother, grandmother, and homemaker at heart. In 1984, Juanita moved to her home in Sutherland with her daughter Susan. In 1992, Juanita rekindled her high school friendship with Arnold (Arnie) Welter whom she later married, and remained friends with until his death in 2005. She passed away on Monday, November 17, 2014, at Careage Hills Nursing Home in Cherokee reaching the age of 88 years and 4 days.
She was baptized in 1926 in the Methodist Church in Sioux City, Iowa. She was a long time member of the Methodist Church of Sutherland, served on Circle and was a member of the Methodist Women. For many years Juanita attended the Bethel Lutheran Church of Sutherland and enjoyed several programs and activities for her three granddaughters. Juanita loved playing cards, especially on holidays and at family get-togethers at the farm. Juanita was a fabulous cook and enjoyed preparing meals. She was famous for her pies and her homemade cookie and candy Christmas tray that remains a family tradition. Juanita always looked forward to the annual family summer vacations in Sioux Falls, South Dakota. Her pride and joy were her three granddaughters Jill, Cassie, and Noelle and spending time teaching them to play cards while eating snacks.
Left to cherish her memory are two daughters, Susan Hoeppner of Sutherland; Debbie and her husband, Terry Kruse of Sutherland; two sons, Mike Hoeppner of Okoboji; John Hoeppner of Arizona; three granddaughters, Jillian and her husband, Heath Mews of Sutherland; Cassandra Kruse of Sutherland/Los Angeles, California, Noelle Kruse of Sutherland and her fianc, Evan Magnussen; one sister, Ruth Failor of Rhodes; along with other grandchildren, great-grandchildren, a niece and a nephew, and a host of other relatives and friends. Juanita will always be remembered for her love of entertaining and her warm hospitality. She was a loving wife, mother and grandmother.
Juanita was preceded in death by her parents, her first husband Paul; her second husband Arnie; and her brother, Jack.
To order memorial trees or send flowers to the family in memory of Juanita M. Hoeppner, please visit our flower store.