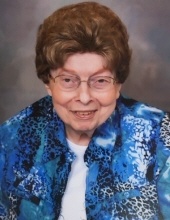 Arrangements are under the care of the
Eldridge Family Funeral Home; Primghar, Iowa.
JUNE E. STANGELAND
June Elaine Stangeland, the daughter of Alfred and Mildred (Brown) Lorenzen, was born March 24, 1926 near Center Township outside Primghar, Iowa. She received her education in Highland Township #1 and graduated from Primghar High School in 1944. After graduating she worked at Earl Wagoner Abstract office at the courthouse treasurer’s office. June was united in marriage to Elmer L. Stangeland on March 9, 1947 at the Congregational Church of Primghar. To this union, two children were born, Ronald and Susan. June and Elmer farmed south of Primghar for over 45 years, before moving to Primghar in September of 1992. She also worked at the United States Post Office in Primghar and Sheldon for 22 years. June and Elmer moved to Prairie View in 2017. Elmer preceded June in death on May 4, 2018. June remained at Prairie View where she passed away on Monday, August 12, 2019 reaching the age of 93 years, 4 months and 18 days.
June was a lifelong member of the Congregational and United Church of Primghar and a member of the women’s fellowship and taught Sunday school. She was a past matron of the Order of the Eastern Star, being actively involved for many years. She kept a diary for many years, and it was referred to many times. Most of all June was a devoted mother and grandmother enjoying their activities.
Left to cherish June’s memory are her children, Ronald and his wife, JoAnn of Albert Lea, Minnesota and daughter, Susan and her husband, Rod Klarenbeek of Larchwood, Iowa; three grandchildren, Deanna Schave of Kansas City, Missouri, Tony Stangeland of Albert Lea, Minnesota and Ryan Schave of Boulder, Colorado; two great grandchildren, Tyler and Briannah Stangeland; also other relatives and friends.
June was preceded in death by her parents; husband, Elmer; brothers, Frederick and Emil and sisters, Frances and Lila.

The Lord is my Shepherd; I shall
not want. He maketh me to lie
down in green pastures; He leadeth
me beside still waters. He
restoreth my soul; He leadeth me
in the paths of righteousness for
His name’s sake.
Yea, though I walk through the
valley of the shadow of death, I will
fear no evil; for Thou art with me;
Thy rod and Thy staff they comfort
me; Thou preparest a table before
me in the presence of mine enemies;
Thou anointest my head with oil,
my cup runneth over.
Surely goodness and mercy shall
follow me all the days of my life;
and I will dwell in the house of the
Lord forever.
To order memorial trees or send flowers to the family in memory of June Stangeland, please visit our flower store.