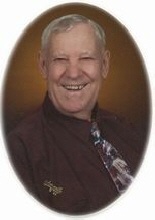 IN MEMORY OF
KENNETH F. STRAUB

CONGREGATIONAL HYMNS
“Jesus Shepherd of the Sheep”
“I am Jesus Little Lamb”
“The Lord’s My Shepherd”
Organist: Alice Fintel

KENNETH F. STRAUB
Kenneth F. Straub the son of Edmund Sr. and Anna (Richter) Straub, was born on the family farm in Caledonia Township of O’Brien County, Iowa on August 3, 1925. He received his education in Zion Lutheran School and later graduating from Paullina High School. He was called into the United States Army and served during World War II. On February 15, 1948, he was united in marriage to Alice Karstens at her parent’s farm home southeast of Paullina. After their marriage the couple farmed the Karstens family farm for many years. The couple were also active in raising hogs and having a dairy operation. Kenneth was still active in farming, because of his enjoyment and the love of the farm. He passed away on Friday, June 8, 2007 at the Avera-McKennan Hospital in Sioux Falls, South Dakota, reaching the age of 81 years, 10 months and 5 days.
He was baptized and confirmed and was a lifelong member of the Zion Lutheran Church in Paullina. He enjoyed serving his church as an Elder, teaching Sunday School and in helping build the present Zion Lutheran Church. He was very active on the Lutheran Layman’s League.
Kenneth leaves to cherish his memory are his wife of 59 years, Alice of rural Paullina; their five children, Rebecca and her husband, John Krahling in Australia; Vincent and his wife, Pam Straub of Corvallis, Oregon; Joyce and her husband, Russ Brockmeier of Sandy, Utah; Terry Straub of rural Paullina; Barb and her husband, Kevin Wenninger of Winthrop, Minnesota; nine grandchildren and five great-grandchildren, a brother and his wife, Eugene and Irma Straub of Topeka, Kansas; a sister-in-law, Nadine Straub of Sutherland, Iowa and a brother-in-law, Jack Smith of Sioux City, Iowa; also nieces, nephews and other relatives and many friends.
He was preceded in death by his parents, two brothers and a sister.
To order memorial trees or send flowers to the family in memory of Kenneth F. Straub, please visit our flower store.