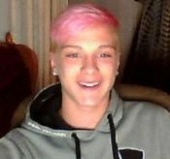 CONGREGATIONAL HYMNS
“Amazing Grace”
“How Great Thou Art”
“In the Garden”
“Go, My Children, With My Blessing”
Organist: Donna Struve

After today’s graveside service family and friends are invited
to join the family in the fellowship hall of the church.

In lieu of flowers the family wishes that
memorials be made to the family.
Kenneth J. Weishuhn Jr.
Kenneth J. Weishuhn Jr., the son of Kenneth J. Weishuhn Sr. and Jeannie (Barrows) Chambers was born May 27, 1997 in Sheldon, Iowa. He was currently a freshman at South O’ Brien High School in Paullina, Iowa. He passed away on April 15, 2012 at his parent’s residence in Primghar, Iowa.
He was a member of the Thundercats soccer team. He enjoyed shopping, video games, rollerblading and spending time with his family. KJ was a respectful and kind person in which he always had a smile on his face. He liked the colors pink and orange. Family was a major part of his life and he had a special bond with his cousins and his best friend, was his sister, Kayla Weishuhn.
Kenneth is survived by his father, Kenneth of Arizona and his mother and step-father, Jeannie and Kenny Chambers of Primghar, Iowa; a sister, Kayla Weishuhn of Primghar, Iowa; a brother, Matthew Schoneman of Ashton, Iowa; aunts, Misty and her husband, Anthony Vitrano of Paullina, Iowa; Kim Weishuhn; Jennifer and her husband, Dan Ten Kley of Primghar, Iowa; Suzette and her husband, Orin and Carrie; and uncles, Chris Barrows of Primghar, Iowa; Tom Weishuhn of Prescott, Arizona; three grandmothers, Linda Johnson of Primghar, Iowa; Theresa Carillo of Prescott, Arizona and CeCe Chambers of Primghar, Iowa; great-grandmother, Dorothy Chambers of Primghar, Iowa; thirteen cousins, Erin, Vicki, Ashley, Brent, Jonathan, Breanne, Shey Shey, Mattie, Theresa, Tomás, Sammi, Evie-Rose and Kendra; also other relatives and friends.
He was preceded in death by his paternal grandfather, George Weishuhn and grandfather, Alfred Chambers.
To order memorial trees or send flowers to the family in memory of Kenneth James Weishuhn Jr., please visit our flower store.