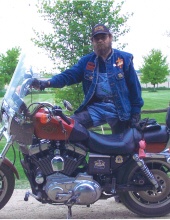 Kent D. Marquardt
Primghar, Iowa
Kent D. Marquardt, age 62, of Primghar, Iowa who passed away on Monday, February 17, 2020 at Pearl Valley Rehab in Primghar. His Memorial Service will be 10:30 A.M. Saturday, February 29, 2020 at the Grace Lutheran Church in Primghar, Iowa with Pastor Kim Wermersen ~ officiating.
Visitation will take place after the service at the church.
Kent “Squirt” Dean Marquardt
Kent “Squirt” Dean Marquardt, was born on September 7, 1957, in Estherville, Iowa to Lawrence and Alice (Wicks) Marquardt. He passed away losing his battle with prostate cancer on February 17, 2020, at the age of 62. His parents and sister were at his side in the end, after many friends and family had visited him on his last day.
He was baptized and confirmed at Grace Lutheran Church in Primghar. He spent the first 4 years of his life at Dolliver, Iowa where he had a close relationship with his grandfather and wanted to “do work” with him. The family then moved to the family farm near Primghar. It was there he welcomed his sister, Gail. He attended and graduated from Primghar Community School.
During his youth, Kent was active in 4-H raising and showing dairy calves, pigs, and sheep. He was very successful in showing his livestock, and earned many Grand and Reserve Champions at the O’Brien County Fair.
Kent had an incredibly strong work ethic due to growing up on the family farm. After high school, he started working for WITCO in Spencer. He excelled as a forklift operator for 24 years until the company moved its operations, He had several other factory jobs in Spencer at Graham Tire, Whittenberg Beverage Co. and lastly at Southshore Enterprises, as a forklift operator. He made an impact wherever he worked.
One of Kent’s greatest passions was riding his Harley Davidsons. He loved the freedom to be on the open road with the wind blowing through his hair and his chance to “make noise”. He also was a collector of toy tractors, Hot Wheels, Harley toys, trucks, and antique tractors that he entered at parades. He was a member of the Christian Motorcycle Club (CMA). Willie Nelson was his music idol and attended many of his concerts. Kent also was an avid Green Bay Packers fan and wore his cheesehead proudly. He also enjoyed helping at the Figure 8 races with the Wulf gang.
He worked on the family farm when he wasn’t employed. Kent always had to be busy and doing work. The family farm has been well taken care of with his hard work the last couple years cleaning up the grove. Kent also took pride in keeping the lawn looking pristine. It was difficult in his last days to not be able to do work. His motto throughout life was “Do Work” from his childhood days. Now he will have that chance in heaven to “Do Work” and ride his Harley on heaven’s roads.
He is survived by his parents Lawrence and Alice Marquardt; his sister, Gail Marquardt Hodges and husband Jay; step daughters Jessica, Jenny, Amy, and their mother Glenda; Aunt Lois Chartier; Cousins Fred, Claudia, and John; Uncle Wayne Wicks and his wife, Darlene; Cousins Paul, Keith, Diane, and Kay. Step niece and nephew Jessica and Devin; many other friends, classmates, co-workers, fellow Harley riders, and anyone he came in contact with.
To order memorial trees or send flowers to the family in memory of Kent D. Marquardt, please visit our flower store.