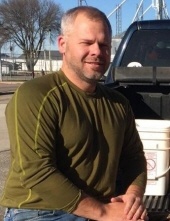 CONGREGATIONAL HYMNS
“Lift High The Cross”
“On Eagle’s Wings”
“Abide With Me”
“Crown Him With Many Crowns”
Organist: Angela Johannsen

In lieu of flowers, memorials may be directed towards the
Struve family for a future scholarship in Kirk’s name.

After today’s graveside service, relatives and friends are invited
to join the family at the Paullina American Legion.

Kirk Andrew Struve, 47, of Granville, IA, passed away Sunday, January 27th at Buena Vista Regional Medical Center in Storm Lake, IA following a tragic hunting accident. Kirk was born on June 26, 1971 in Sioux City, IA to Craig and Chris (Brink) Struve. In 1976, Kirk and his family moved to Calumet, IA, where he was raised. The town was he and his siblings’ playground. It was in Calumet where he discovered his love for agriculture at C-S Agrow Service, the family business. There, he could be found interacting with customers at a young age and driving to look at fields even before he had a license. Kirk attended Sutherland High School, graduating in 1990. Kirk fell in love with Heather Farquhar, and on August 6, 1993, they were married. He graduated from South Dakota State University with a degree in Agronomy in 1994. After graduation, Kirk and Heather bought a home outside of Granville, IA where they were currently raising their four children.
After college, Kirk worked as an agronomist at C-S Agrow with his dad. After the sale of C-S Agrow in 2008, he worked with AgPartners until 2010. In 2010, he took over Ag Land Custom Company and continued his true love of planting and harvesting for so many good people and farming the family ground. He kept himself busy with various other tasks throughout the year, always willing to help a friend or stranger in need and was always dedicated to his work. He had a positive outlook, no matter how wet or dry the weather conditions. Even though he was recognized as someone with great work ethic, he was better known for who he was as a person. He had a contagious smile and could become a friend to almost anyone. Outside of work, you could see Kirk attending his kids’ events, smoking his famous ribs, and making those around him laugh. Kirk has passed onto his children a sense of character, value, and the importance of friendship that will always be remembered. He was a member of St. John Lutheran Church in Germantown, IA where he served as a trustee and grave digger, was a member of the Granville Improvement Club, and served as a volunteer fireman. He impacted so many.
Kirk is survived by his wife, Heather (Farquhar), kids, Brett, Damon (special friend Krayton Schnepf), Sydney, and Parker of Granville, IA, parents, Craig and Chris (Brink) of Okoboji, IA, siblings, Tammy (Matt) Fox of Cedar Rapids, IA, Mark Struve of West Des Moines, IA, Matthew (Jada) Struve of Sutherland, IA, father-in-law Don (Kay) Farquhar of Sutherland, IA, mother-in-law Linda (Rich) Ratka of Hutchinson, MN, brothers-in-law Ryan (Heidi) Farquhar of Sutherland, IA, Ross (Jess) Farquhar of Norwalk, IA, and Lee (Jamie) Farquhar of Plainfield, IN, and many extended family members and friends. He will be deeply missed by his family, friends, and the entire community.
A visitation is scheduled for Friday, February 1st at Zion Lutheran Church in Paullina, IA from 12-6 with family present from 3-5. Funeral services are scheduled for Saturday, February 2nd at 10:00am at Zion Lutheran Church in Paullina, IA. Following the funeral there will be a time to celebrate the life of Kirk at the Paullina Legion. The family asks you to please come ready to share your favorite memories of Kirk so that we can all cherish the impact he had on the people that were lucky enough to have known him.
To order memorial trees or send flowers to the family in memory of Kirk A. Struve, please visit our flower store.