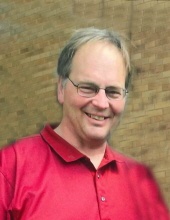 A private family service will be held on Sunday, June 26, 2022 at the Eldridge Family Funeral Home in Primghar.

L. Paul Einck, son of Leon and Edna (Oldre) Einck was born on March 5, 1967, in Primghar, IA. He attended Primghar High School, graduating in 1985. He did not particularly love school, but he loved his friends and football. His nickname, “Tank” was born during his days as a linebacker and stuck with him all his life. Paul worked around his family’s truck shed since he was old enough to push a broom. By 13 he was driving to local sale barns with his dad and brothers. After graduation, Paul and high school friend moved out to California to install swimming pools for about a year before moving home to work and drive truck for Double M Transport—his brother Marv and wife Mary’s business. After a few years of driving for Marv, Paul bought his first truck, a white 1990 International cabover. He was an owner operator thereon and drove over the road. Paul worked hard and was proud to build his first Peterbilt glider. He only owned Peterbilts after that and also owned 2 Wilson pots. Paul hauled cattle and hogs but once in a while got a unique load of horses, sheep, buffalo, watermelon, or carwash equipment. Paul genuinely loved trucking and travelling and developed friendships from that love. Paul married Lee in 1995. Paul enjoyed Lee’s family and kids, Andy and Mollie, for many years. Together Paul and Lee had two daughters, Kellie in 1995 and Korrie in 1997.. He was a proud dad and would bring the girls to the truck shed with him instead of taking them to daycare. Growing up, Kellie and Korrie spent most summers in the truck with their dad. Paul took them from Maine to California, stopping at attractions along the way as time and loads allowed. Paul and the girls made many runs to Kuna, ID for calves and loved spending time between loads at the waterpark in Meridian, ID. Paul saw trucking as an adventure instead of work. He sought friendship wherever he went. He pushed the girls to make pen pals that they still talk to today. Paul left his mark everywhere he stopped and with everyone he met. He was never pushed for time and was never in a hurry. Paul continued to be an owner operator from 1990 until 2014 when Marv & Mary retired. From 2014 until 2019, Paul owned Einck Trucking and hauled mostly local hogs. Paul enjoyed riding motorcycle. He bought his 1984 Kawasaki GPZ 1100 new and drag raced with it. Later, Paul bought new, his 2006 Harley Davidson Night Train and rode that on several longer trips and poker runs with friends, family, and his daughters. Paul liked to tinker and build. He acquired a 1974 Peterbilt 352 cabover from Marv and was restoring it with sentiment and help from his daughters. He dreamed of bringing it to Big Iron Classic in Kasson, MN. Paul and the girls enjoyed attending the Big Iron and it happened to fall right around the girls’ birthdays every year. Paul filled his last years spending time with family. His best days were with his daughters and giving granddaughter Sadie Tootsie Rolls from his bib overall pockets and liked watching his grand dogs, Lola and Timber play. He loved seeing what his siblings were up to and helping where he could.

To order memorial trees or send flowers to the family in memory of L. Paul "Tank" Einck, please visit our flower store.