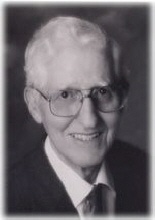 IN MEMORY OF
LEE T. FREERKING

Lee Tyler Freerking, the son of Henry and Bessie (Tyler) Freerking was born November 24, 1925 in rural Ute, Iowa. He received his education in a country school in the Ute area and graduated from Ute High School in 1944. He came to the Paullina area where he worked as a farm hand for his brother, John Freerking and later for Merle Ihle. On October 10, 1948, he was united in marriage to Margaret Keiner in Onawa, Iowa. Their married life has been spent in the Paullina area. For 25 years, Lee was employed as a custodian at the Paullina School until his retirement in 1988. The couple’s retirement years were spent in Paullina. He had been a resident of the Paullina Care Center since March of 2007. He passed away at the care center on Monday, May 7, 2007, reaching the age of 81 years, 5 months and 13 days.
He was a member of the First Presbyterian Church in Paullina and had served as a deacon and on the Board of Trustees. He enjoyed hunting, fishing and woodworking.
Left to cherish Lee’s Memory are his wife of 58 years, Margaret of Paullina; a son and his wife, Russell and Marie Freerking of Decorah, Iowa; a daughter and her husband, Rita and Doug Pierson of Cherokee, Iowa; three grandchildren, Brian and his wife, Lisa Freerking; Sara and Claire Jacobmeyer; three step grandchildren, Rebekah, Andrew and Daniel Pierson; a sister, Zelma and her husband, James Downing of Sioux City, Iowa; also nieces, nephews and other relatives and friends.
He was preceded in death by his parents, two brothers and five sisters.
To order memorial trees or send flowers to the family in memory of Lee Tyler Freerking, please visit our flower store.