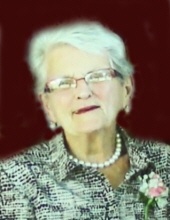 Visitation with family present will be from 5 - 7 P.M. on Monday, June 25, 2018 at the Eldridge Family Funeral Home in Primghar.

MUSIC
“I Can Only Imagine”
“I Was There To Hear Your Borning Cry”
sung by: Randy Orthmann
CONGREGATIONAL HYMNS
“Jesus Loves Even Me”
“Lift High The Cross”
“Shine Jesus Shine”
Recessional Song
“She Will Be Coming Around The Mountain”
Organist: Glenn Henriksen

Memorials may be designated to Abben Cancer Center
or The United Church of Primghar designated for Camperships for Kids.

Arrangements under the care of the
Eldridge Family Funeral Home; Primghar, Iowa
LEONE MAE MANLEY
Leone Mae Manley was born March 14, 1927 in Sioux City, IA., to Ray and Alice (Warrington) Iblings. After her parents divorced Leone and her mother moved to a farm house near Gaza and began 5th grade there. They kept house for a bachelor farmer. They eventually moved to Primghar where mother completed her last two years of high school graduating from Primghar in 1946. While in high school Leone enjoyed being a cheerleader, worked at the grocery store and continued cleaning homes. After graduating, Leone and her mother worked at the Cherokee Mental Health Institution until she married the love of her life, T. Lee Manley on Oct. 8, 1946 at the First Congregational, United Church of Christ in Primghar. They lived in New York City while Lee was stationed at West Point Academy. After Lee was discharged from the Army they returned to O’Brien County where they farmed east of Primghar and then south of Hartley where they raised their three children. Leone took pride in taking care of the family, was a great cook, gardener, and helped Lee on the farm.
When they retired they moved to Hartley. After Lee passed away Leone moved to Spencer and then the Highlands in 2016. Leone passed away June 21 at St. Luke’s Lutheran Home. Leone was a member of the United Church of Primghar and a member of the Order of the Eastern Star. She enjoyed spending the winter months in Arizona, playing cards, socializing with friends & family, attending her grandchildren’s events and lived life to the fullest.
Leone is survived by her children: Diana Walvoord of Spencer; Tom (Jan) Manley of Spirit Lake; Alice (Randy) Roghair of Royal. Seven grandchildren and families: Felecia (Scott) Kloewer of Spencer, Bryan, Brittany & Tanner, Keegan, Mak & Briana & Beckham; Jon (Jodi) Walvoord, Livia & Cooper of West Des Moines; Rachel Walvoord & Storm of Spencer; Teresa (Jeremy) Cauwels, Gannon, Greyson & Kennedy of Sioux Falls, SD.; Lisa (Darin) Zitterich, Jenna & Brooke of Spencer; Abby Roghair & Zach Stephens & Henleigh of Early; Nick Roghair & Brittanee Heaning of Royal. Sister-in-law, Marlene Iblings of Worthington, MN.; l brother-in-law, Donald Manley of Spencer and sister-in-law, Ellen Manley. A host of other relatives and friends. She was preceded in death by her parents and husband, Lee in 2004; brother, Glen Iblings in 2003; brother-in-law and sister-in-law, Lee and Dorothy Cooper; sister-in-law, Delores Manley; Grandson-in-law, Nate Mart.

The Lord is my Shepherd; I shall
not want. He maketh me to lie
down in green pastures; He leadeth
me beside still waters. He
restoreth my soul; He leadeth me
in the paths of righteousness for
His name’s sake.
Yea, though I walk through the
valley of the shadow of death, I will
fear no evil; for Thou art with me;
Thy rod and Thy staff they comfort
me; Thou preparest a table before
me in the presence of mine enemies;
Thou anointest my head with oil,
my cup runneth over.
Surely goodness and mercy shall
follow me all the days of my life;
and I will dwell in the house of the
Lord forever.
To order memorial trees or send flowers to the family in memory of Leone Mae Manley, please visit our flower store.