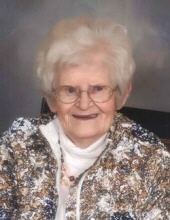 IN LOVING MEMORY OF
LILLIAN FLAUGH

Visitation will be after 5 P.M. Tuesday
with the family present from 5 to 7 P.M. Tuesday
at the Eldridge Family Funeral Home in Paullina.

MUSIC
C.D.s Elvis Presley
Amazing Grace
How Great Thou Art
I Did It My Way

After the graveside service relatives and friends are invited to
join the family in the Laue Room of the
Paullina Community Building.

LILLIAN FLAUGH
Lillian Flaugh, the daughter of Andrew and Rosella Stangeland and was born October 27, 1921 in Fargo, North Dakota. She moved to the Archer, Iowa area as a small child and received her education in Archer schools. In November of 1942, she was united in marriage to Bernard Flaugh in Kearney, Nebraska. Bernard was called into the service during W.W. II and Lillian lived in California to wait for his return from the service. When Bernard was discharged, the couple moved to the Archer, Iowa area, where they began farming 160 acres of OBrien County farmland. Her husband passed away very suddenly in October of 1959. Lillian remained on the family farm where she farmed and raised her five children and remained on the farm in her retirement. She moved to the Primghar Care Center and later to the Prairie View Retirement Home in Sanborn, Iowa in July of 2015. She passed away on April 29, 2017 at Prairie View reaching the age of 95 years, 6 months and two days.
She was a member of Siloam Lutheran Church in Paullina and was active in the Ladies Aid of the church. She enjoyed spending time with her family, quilting, sewing and playing cards.
Lillian leaves to cherish her memory her five children; Barbara (Daniel) Roethler of Salix, Iowa; Loren (Sally) Flaugh of Primghar, Iowa; Beverly (Max) Teeters of Solomon, Kansas; Arlan (Debra) Flaugh of Garner, Iowa and Loretta (Stewart) Roth of Harrisburg, South Dakota; 13 grandchildren; 26 great grandchildren and 2 great-great grandchildren; a sister-in-law, Leta Flaugh Matiesen of Washagaul, Washington also other relatives and friends.
She was preceded in death by a granddaughter, Melissa Jo; her parents, one sister, Mildred Buse and one brother and his wife, Roy and Marie Stangeland.
To order memorial trees or send flowers to the family in memory of Lillian Flaugh, please visit our flower store.