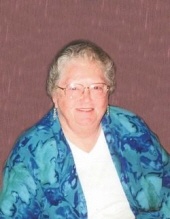 GRAVESIDE SERVICES
Family services will be at the
Prairie View Cemetery
Paullina, Iowa

Lois P. Stewart, the daughter of William Francis and Marie (Nottleman) Collins was born May 9, 1932 in Thurston County, Nebraska. She graduated from Walthill, Nebraska High School. On May 22, 1982, she was united in marriage to Calvin Stewart and their married life was spent in Paullina. Lois used her baking abilities and worked for a few years as a Donut Maker at Caseys General Store in Paullina. Cal preceded her in death on January 20, 2012 in Paullina. Lois remained in the family home and passed away there on Tuesday, April 8, 2014 reaching the age of 82 years, 10 months and 29 days.
Cal and Lois spent many hours enjoying campfires with friends and neighbors. She was well known for her cooking, canning, baking and cake decorating skills. She enjoyed spending time with her family, quilting, embroidering, crocheting and knitting.
Lois is survived by three children, Diane and her husband, Mike Ingvall of Fostoria, Iowa; Walt and his wife, Janet Bahr and Mike and his wife, Terri Bahr all of Portland, Oregon; four step-children, Roger Craig and his wife, Linda Stewart of Spiro, Oklahoma; Kay Stewart of Mankato, Minnesota; Cheri and her husband, Martin Langford of Owatonna, Minnesota and Rochelle and her husband, Randy Hofmeyer of Paullina; 16 grandchildren and many great grandchildren; one sister, Joan Hightree of Decatur, Nebraska and a brother and his wife, John and Vicki Collins of Sioux City; also other relatives and many friends.
To order memorial trees or send flowers to the family in memory of Lois P. Stewart, please visit our flower store.