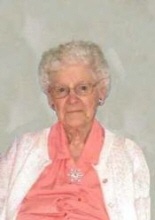 CONGREGATIONAL HYMNS
“Rock of Ages”
“What a Friend We Have in Jesus”
“Heaven Is My Home”
“Abide With Me”
Organist: Jolene Erickson

After the graveside services relatives and friends are invited to join the family in the Germantown Community Building.

Marcella Lydia Marie (Mesner) Appeldorn, the daughter of John and Sophia (Ebert) Mesner was born June 18, 1924 in Caledonia Township, O’Brien County, Iowa. She was baptized in St. John Lutheran Church in Germantown on July 6, 1924. She received her education in country school to the 4th grade and went on to attend St. John Lutheran School in Germantown from the 4th to the 8th grade. She attended Paullina High School in Paullina for the 9th grade and from there worked as a hired hand until January 27, 1946, when she married Delbert J. Appeldorn at St. John’s Lutheran Church at Germantown. After their marriage the couple farmed two miles east and one mile south of Germantown until November 30, 1981. Delbert passed away in a truck accident on March 12, 1988 in Storm Lake, Iowa. Marcella remained on the farm until moving into Paullina in 1990. She passed away on Wednesday, July 11, 2012 at the Sutherland Care Center in Sutherland, Iowa reaching the age of 88 years and 23 days.
She was baptized and later confirmed on April 10, 1938 and was a lifelong member of the St. John Lutheran Church in Germantown. She enjoyed gardening, embroidering quilts for her grandchildren and baking.
Marcella is survived by three sons, Dennis and his wife, Sandy Appeldorn of Ankeny, Iowa; Rodney Appeldorn of Fayetteville, Arkansas and Larry and his wife, Kristie Appeldorn of Paullina, Iowa; two daughters, Stephanie Mesner of Spencer, Iowa and Sandy and her husband, Brent Peterson of Sioux Rapids, Iowa; 13 grandchildren, 21 great grandchildren, one sister, LuEtta and her husband, Les Dau of Paullina, Iowa; also other relatives and friends.
She was preceded in death by her husband, son-in-law, Randy Mesner; her parents, a sister, Ella Appeldorn; a brother, Leroy Mesner; three step sisters, Frieda Pauling, Lucille Hurtig and Hilda Miller; three step brothers, Ira, Ray and Reinhard Tesch.
To order memorial trees or send flowers to the family in memory of Marcella L. Appeldorn, please visit our flower store.