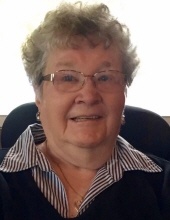 Services for Marcia Engelke, age 88, of Sutherland who passed away on Friday, March 5, 2021 at Pearl Valley Nursing Home in Sutherland. A Celebration of Life for 88-year-old Marica Engelke of Rural Sutherland will be Saturday, September 11th, from 3-6 p.m. at the R.L. Johnannsen Center in Sutherland.

In lieu of flowers, the family would like memorials made to Alzheimer's of Siouxland or Cherokee Regional Hospice. Any arrangements that may be sent are requested to be plants.
Arrangements are under the care of the Eldridge Family Funeral Home in Paullina.

Marcia M. (Rausch) Engelke peacefully passed away Friday, March 5, with her husband and children at her side (personally and virtually). After 17 years living with the diagnosis and almost 6 years in the Care Center, she left the memory loss and pain of Alzheimer’s behind and is now walking and singing with Jesus in her forever home.

Marcia was born to Frank & Bonnie (Blodwen Hughes) Rausch on February 5, 1933, at their home in Spring Township, Cherokee County, Iowa. She was welcomed by older brother, Rodney. Marcia’s uncle liked to tell the story that Frank and Bonnie’s family was one of the first with running water—"it ran in the east side and out the west”.

After farming at three locations, in 1939, their family moved to Paullina to run Rausch’s 5 & 10. Marcia helped at the store when young using a little red chair to stand on to reach the counter. As she got older, she worked at the store around her high school activities such as drum majorette, band, and choir (including All State Choir). As an adult, she proudly referred to herself as a “dime store kid”.

When she was a sophomore, Marcia met her future husband, Bill Engelke. She was the only girl who Bill took home to meet his parents; he recalls that she “invited herself”. In 1951, she accompanied his parents on a trip to California to see Bill. That trip “sealed the deal” in his mind and hers.

After graduating from Paullina High School in 1951, Marcia immediately began summer school at Buena Vista College, graduating in the summer of 1952 with her two-year teaching degree. A few weeks later Marcia began her first full-time job, teaching 1st grade for the Sutherland School District. That was the only year she had a classroom of her own but touched many more children’s lives while substituting for more than 40 years (including her daughter’s kindergarten classroom in Sioux City).

Marcia and Bill were married on August 10, 1952 very shortly after Bill returned from the service. Their family grew with the birth of Jenny Ann (‘53), Greg (‘55) and Amy Jo (‘59). In 1955, they moved to the family farm. Bill says Marcia helped sort hogs, load cattle, ran the corn picker and drove the International 300 tractor with baler around the neighborhood while Bill stacked the bales of hay. They referred to themselves as “Ma & Pa Operation”.

Until her later years, she was an active member of the United Methodist Church and Home & Hobby. She shared her vocal music talent singing in church and community choirs plus comforting those at their time of grief by singing at many funerals. For several years, she was a patient and community advocate at the nursing home. Marcia enjoyed gardening, sewing, needlepoint & cross stitch. Her children remember her knitting or crocheting many evenings. Each grandchild has an afghan she made for them.

Marcia was a life-long teacher and learner. Beyond substitute teaching, she taught Sunday School, directed Jr High choir, and helped girls learn how to twirl the baton; she built her own chair and bookshelf after taking night classes. Even after Alzheimer’s invaded her life, Marcia continued to grow in her faith joining others in Bible study. The life lessons she taught while washing dishes, pulling weeds, walking beans, and in so many other ways are the most treasured. She didn’t lecture but led by example. Through her consistent faithful walk, she led each of her children, husband, and others on the pathway to their own Christian faith journeys.

Best friends, Bill and Marcia truly enjoyed spending time together. Marcia found many short clippings that are posted around their home. All three of their vehicles have a saying she typed in larger bold print and then placed on each dash. “Too old to work, too young to die. So here we go, just Mom and I.” Throughout their marriage, Bill bought dozens of single red roses for “Me Lady” and gave them to her one by one over the years. Teasingly asking “Do you want to be thanked once or many times.”, he encourages younger men to do the same—not to get the thank you but simply to show the love.

Pastor Robin Thomas will officiate at a private family service on Saturday, March 13, 2021 at the Sutherland United Methodist Church with burial at Waterman Cemetery in Sutherland. There will be no visitation. The family is planning a Celebration of Life in late summer/fall when more people have been vaccinated. At that time, all will be able to enjoy time visiting and celebrating the life of Marcia.

Memorials to Alzheimer's of Siouxland or Cherokee Regional Hospice or plants are preferred in lieu of flowers. Arrangements are under the care of the Eldridge Family Funeral Home in Paullina.
To order memorial trees or send flowers to the family in memory of Marcia M. Engelke, please visit our flower store.