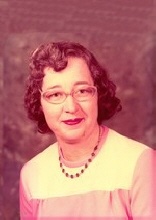 IN MEMORY OF
MARGARET E. LARSEN

VISITATION
Will be 1 hour prior to the service on Monday at the Gaudian-Eldridge Funeral Home; Primghar, Iowa

After the graveside service relatives and friends are
invited to join the family in the fellowship hall
of the Grace Lutheran Church in Primghar.

Arrangements are under the care of the
Gaudian-Eldridge Funeral Home in Paullina, Iowa

Margaret Ellen Larsen, the daughter of Walter and Josie (Gesland) Miles was born March 12, 1936 in Cherokee County, Iowa. She received her education in country schools in Cherokee County. On June 13, 1954, she was united in marriage to Eldon Larsen in Cherokee. After their marriage the couple lived in Cherokee until moving to the Larsen family farm southeast of Paullina where the couple farmed. They later moved to Yankton, South Dakota before retiring and moving to Estherville, Iowa. Her husband preceded her in death on March 17, 2007 in Marshalltown, Iowa. She continued to make her home in Estherville. She passed away on Wednesday, September 9, 2009 at the Avera Holy Family Health Center in Estherville, reaching the age 73 years, 5 months and 27 days.
Margaret is survived by two daughters, Betty and Jay Drury of Estherville and Susan Copatach and friend, Buddy Byrge of Wellington, Utah; three grandchildren, David Stevenson; Jacob Young and Brandi Young; three sisters, Grace LaFrance of Galva, Iowa; Janet Watson of Sibley, Iowa and Pat Howard of Two Rivers, Wisconsin; one brother, John Miles of Rhome, Texas; also other relatives and friends.
She was preceded in death by her husband, a daughter, Linda; grandson, Justin Young; her parents, two brothers and one sister.
To order memorial trees or send flowers to the family in memory of Margaret E. Larsen, please visit our flower store.