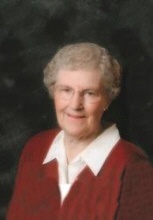 IN LOVING MEMORY OF
MARILYN A. DAU

MUSIC
“Softly and Tenderly”
“In The Garden”
Sung by: Joel and Andrea Orthmann
CONGREGATIONAL HYMNS
“What A Friend We Have In Jesus”
“Rock of Ages”
Organist: Jan Ebel

Marilyn Alice Dau was born February 8, 1927 on the family farm near Germantown, Iowa the daughter of Henry and Mathilda (Gebert) Fiddelke. She was baptized on February 27, 1927 and later confirmed on May 5, 1940 all at St. John Lutheran Church. She attended St. John Lutheran School through the 8th grade and Paullina High School, graduating in 1944. On June 29, 1947, Marilyn was united in marriage to Raymond Dau at St. John Lutheran Church in Germantown. This union was blessed with two children: Dennis and Sheryl. The couple farmed south of Sutherland on Ray’s parent’s farm until June of 1992, when they retired and moved to her parent’s home in Paullina. In April 2012, Ray and Marilyn moved to the Primghar Care Center where Marilyn passed away on Thursday, May 2, 2013 reaching the age of 86 years, 2 months and 24 days.
Marilyn enjoyed time spent with her children and their families as well as friends and relatives. Through the years she enjoyed reading, playing the accordion and organ, watching Major League Baseball, bowling, gardening and many fishing vacations in Minnesota. She was a long time member of the K.Y.N. card club. Marilyn and Ray were members of the Bethel Lutheran Church in Sutherland.
Those left to cherish her memory are Ray, her husband of 65 years; her children, Dennis and his wife, Julie Dau of Granville and Sheryl and her husband, Milt Hustedt of Sutherland; four grandchildren and nine great grandchildren, Ryan, Trisha and son, Austyn Dau of Orange City; Daryn, Jackie and daughters, Madison, Brooklyn and Jaelyn Dau of Orange City; Kristen, Cory and daughters, Abbie and Allison Watts of Storm Lake; Brent, Becky and daughters, Lydia, Chloe and Greta Hustedt of Sutherland. Also surviving are a brother, Leonard Fiddelke; in-laws, Florence and Dalton Rehder; nieces and nephews; also other relatives and friends.
She was preceded in death by her parents, a great grandson, Damen Dau; a sister-in-law, Betty Fiddelke; in-laws, Laura and Harry Rohlfsen, Delbert and Vera Dau, Harold and Velma Dau and Lois and Leonard Breitbarth.
To order memorial trees or send flowers to the family in memory of Marilyn Alice Dau, please visit our flower store.