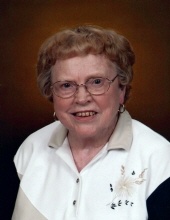 Marion B. Hansen
Paullina, Iowa
Marion passed away peacefully at Pearl Valley Rehab, Sutherland, IA on her 98th birthday, on September 6, 2019. Her funeral service will be 10:30 A.M. on Wednesday, September 11, 2019 at Zion Lutheran Church in Paullina with Rev. Donald Erickson ~ officiating.
Burial will be at the Prairie View Cemetery in Paullina.
Visitation with family present will be from 5 – 7 P.M. on Tuesday, September 10, 2019 at the Eldridge Family Funeral Home in Paullina.
In lieu of flowers, memorials may be directed to Zion Lutheran Church in Paullina.

Marion B. Borgeson was born on September 6, 1921 to Emil and Ida Borgeson. She had a happy childhood and lived on several farms in the Grand Meadow area with loving parents, brother Walter, and sisters Mildred, Edith, Irene and Helen. She attended country schools, graduating from Grand Meadow High School in 1938. Marion was the last surviving alumni. In the winter of 1936 it snowed so much, school was cancelled for about six weeks.

In 1945, Marion and her parents moved to town in Cherokee. She continued to live at home and care for her parents while working as a secretary at Farm Bureau and Iowa State Extension office. During her 17 years at this position, she chaperoned many Rural Youth tours. Marion also worked at various other offices. She was baptized and confirmed at Bethlehem Lutheran Church, Cherokee. She enjoyed traveling and attended Luther League conventions in Boston, Calgary Canada, Chicago and Duluth. In 1953, she took driver’s ed classes with her good friend, Gert Nelson. After she got her driver’s license, she bought her first car, a 1949 Ford.

In 1965, she met Dean Hansen on a blind date and they were engaged 3 weeks later. They were married January 15, 1966 and shortly after, Marion became a farmwife, helping on the family farm south of Paullina. Dean & Marion moved to town in 1989. She was always proud of her Swedish heritage and was an expert at baking Spritz cookies.

Marion had a deep faith in God that was evident in every aspect of her life. She was an active member of Zion Lutheran Church in Paullina. Through her life she enjoyed playing cards, especially Bridge Club, growing and arranging flowers, for which she received many “Best of Show” and blue ribbons at the Marcus Fair. Dean and Marion spent much of their summer camping and attending music festivals.

Though Marion never had children, she loved her nieces and nephews as a mother loves her own. When they were little, she entertained them with games Looby Loo, and bobbing for apples. Marion made dresses for several nieces for special occasions. They benefited greatly from her wisdom and guidance. Marion’s wit kept everyone entertained. In 1948, Marion started writing a letter to family and friends each Christmas, while keeping a copy in a scrapbook. Seventy years of letters have turned into a treasured family journal.